One moment summed up the frustration of seven straight losses last November, when then-Washington State quarterback Jayden de Laura took a giant flag with the famous Cougar head logo and spiked it on the purple ‘W’ at Husky Stadium.

Names and faces have changed in the 12 months since Washington State claimed the Apple Cup in emphatic fashion. But no one associated with the purple and gold of Washington has forgotten.

“Last year, the whole slamming the flag down on our logo, we don’t take that lightly,” Washington wide receiver Jalen McMillan said. “We’re playing it all over the weight room and wherever you walk in that building, you’re going to see that image. So we’re taking it personal.”

The 12th-ranked Huskies make the trek across the Cascades to face Washington State on Saturday night, still holding the slightest chance of something bigger than trying to reclaim the Apple Cup.

By the time kickoff arrives on the chilly Palouse, the Huskies (9-2, 6-2 Pac-12, No. 13 CFP) will know whether the chaos they need around the conference plays out in their favor. If so, a win over the Cougars (7-4, 4-4) will send Washington to the Pac-12 championship game.

No matter whether the scenarios pan out for the Huskies, there’s still the matter of last year’s stinging loss.

“It’s definitely a motivating factor. It’s something the guys haven’t forgot,” Washington coach Kalen DeBoer said. “I think it has to be more than that, because that will wear off. It has to be about the things and what we stand for and how important it is to be our best and the things we’ve discussed since day one when we got here.”

From Aberdeen to Deer Park, from Walla Walla to Whidbey Island, everyone inside the Evergreen State with a rooting interest in the Apple Cup has an opinion on last year’s flag planting.

For the Cougars, it was the end to a painful, frustrating losing streak and in record-setting fashion. The 40-13 victory was Washington State’s largest margin of victory in the history of the rivalry.

For the Huskies, it was the conclusion to a painful 4-8 season that ultimately led to the hiring of DeBoer and a turnaround that has been faster than many expected.

“I would say we learned how much it meant to everybody,” Washington State coach Jake Dickert said. “To snap the streak, to win through adversity, unique circumstances for both teams last year. Obviously for our guys, to stay together and play that hard.”

Washington QB Michael Penix Jr. can inch closer to the single-season school record for passing yards and join some elite company with another big game. Penix has passed for at least 300 yards in nine of 11 games this season. He finished with 298 yards against Oregon State and threw for 229 against Colorado while played just 2½ quarters.

An average game against the Cougars will move him to more than 4,000 yards passing for the season.

Washington State’s been dramatically more efficient the past several weeks following the return of running back Nakia Watson, who had missed nearly a month due to injury. Watson had 166 yards rushing against Stanford and 116 against Arizona State, and while he had only 56 yards on the ground last week against Arizona, he scored two touchdowns — one rushing and one receiving. Washington’s run defense has been an issue at times, including 318 yards allowed to Oregon and 175 to Oregon State.

The last four times the Apple Cup has been played in a year ending in 2 have been among the most memorable games in series history. In 1982, the Apple Cup returned to the Pullman campus after being played for nearly 30 years in Spokane. The Cougars were heavy underdogs, but upset the Huskies 24-20 and denied Washington a berth in the Rose Bowl.

Ten years later, Drew Bledsoe and the Cougars routed the Huskies 42-23 on a snowy afternoon. In 2002, Washington won a controversial 29-26 game in triple overtime that denied Washington State a possible national championship game berth and ended with debris being thrown on the field.

And in 2012, Washington State rallied from an 18-point deficit in the fourth quarter for a 31-28 overtime victory, the largest comeback in series history.

What’s in store this time? 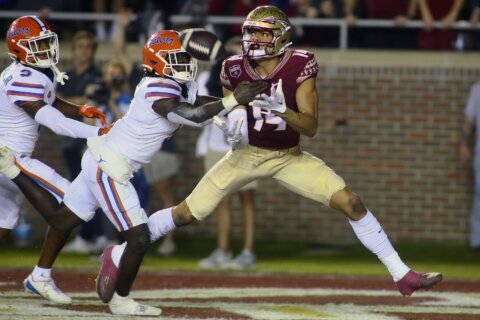