Holidays: 'Enchant' shines with millions of lights in Nats Park | Where to see holiday lights | Send in photos of decorations | How to give greener this season
Home » College Football » Williams' 3 TDs spark…

Delaware State came into the game with a 4-2 record, its best mark through the first six games since 2007, and having won its MEAC opener for the first time since 2014 and its first official conference road win over that same span. The Hornets also came in having won three straight meetings with the Bison.

Jonathan Cardoza-Chicas kicked a 51-yard field goal in the first quarter to put Delaware State on the board first, but Williams answered with a 6-yard toss to Nah’Shawn Hezekiah and Hawthorn broke off his touchdown run to give the Bison a 14-3 lead after a quarter and the lead held up at intermission. Williams threw 14 yards to Matthew McDonald to start the third quarter and scored on a 6-yard run to make it 28-3 heading into the fourth.

Marquis Gillis got the Hornets into the end zone in the fourth quarter, scoring on a 31-yard run, but Hunter answered with his long run on the second play of Howard’s next possession. Thomas Bertrand-Hudon punched in from the 2 in the final minute to set the final score. 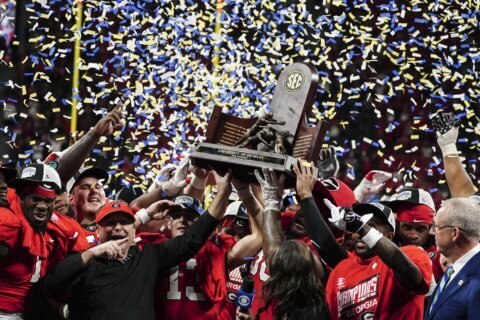