STILLWATER, Okla. (AP) — Oklahoma State accomplished its mission of staying focused during a 63-7 win over Arkansas-Pine Bluff on Saturday night.

Spencer Sanders matched his career single-game high of four touchdown passes in the first 16 minutes and completed 13 of 16 passes for 242 yards and the four scores for the Cowboys (3-0) in their final nonconference game before entering Big 12 play.

Braydon Johnson caught two touchdown passes, making him one of five Oklahoma State players to catch at least one. The Cowboys gained 538 total yards against the Golden Lions (2-1).

“Our guys did a good job of taking care of business,” Oklahoma State coach Mike Gundy said. “We talked about this last Saturday, that we understand on paper that we have a better team, but we need to prepare, practice, respect our opponent and go out and play.”

That’s the kind of success Gundy likes to see heading into the conference opener at No. 17 Baylor on Oct. 1. Baylor defeated Oklahoma State 21-16 in the Big 12 championship game last season.

Arkansas-Pine Bluff: The Golden Lions were completely overmatched. The best performer was Josh Sanchez, who averaged 46.3 yards on 10 punts.

Oklahoma State: The Cowboys looked sharp for the most part, and a lot of players got game action. Oklahoma State held the Golden Lions to 230 total yards, including 87 in the first half.

The reserves played more than the starters in some cases.

“We were able to play a lot of them on on special teams,” Gundy said. “And then for the most part, really, the twos on offense and defense for two and a half quarters.”

The redshirt freshman walk-on had played before but didn’t throw a pass until Saturday. His 16-yard scoring toss to Talyn Shettron put the Cowboys up 49-7 in the second quarter. His second touchdown pass was a 25-yarder to Cale Cabbiness with nine minutes left in the third quarter.

Overall, Gunnar completed 12 of 20 passes for 128 yards with the two touchdowns and an interception and he ran for 42 yards on six carries.

“I thought that he handled the system,” his dad said. “He converted some third downs. He ran the ball effectively.”

Oklahoma State’s Trace Ford blocked a punt and returned it 15 yards for a touchdown in the first quarter, and the Cowboys took a 14-0 lead less than three minutes into the game.

Ford, who missed last season with a torn ACL, had a strong game against Arizona State last week and has been rounding into form.

“He practiced well this week when we put that punt block in,” Mike Gundy said. “He went full speed, practiced full speed, took it serious, and it worked for him.” 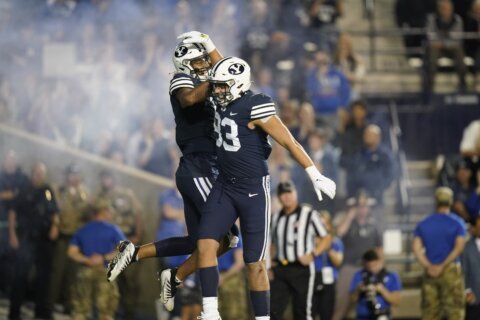 Rivalry clash between No. 19 BYU, Utah St could be last 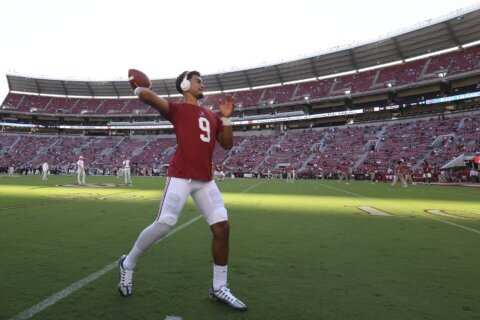