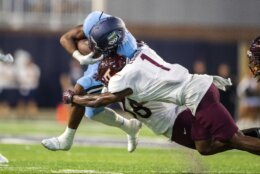 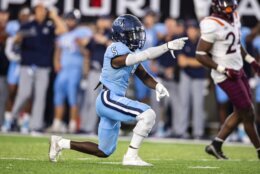 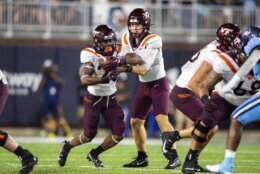 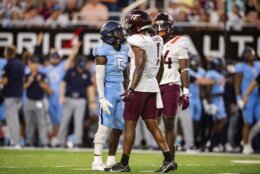 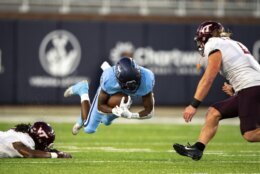 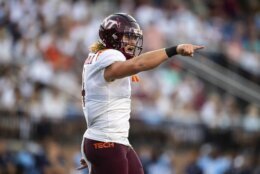 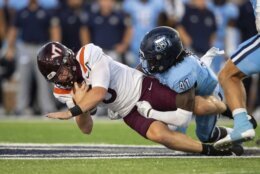 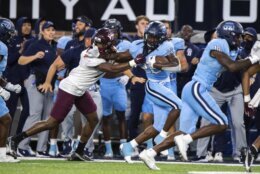 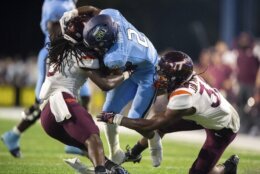 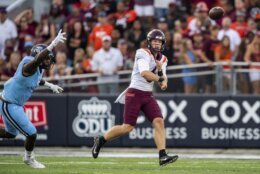 NORFOLK, Va. (AP) — Blake Watson scored on a 1-yard run with 33 seconds to play and Old Dominion beat Virginia Tech for the second time in as many tries on its home field, 20-17 on Friday night.

The Monarchs made a big splash in their debut as a member of the Sun Belt Conference and spoiled the debut of Hokies coach Brent Pry. He was coaching against a longtime colleague at Vanderbilt and Penn State, Ricky Rahne.

When it was over, as they had in 2018 when the Monarchs knocked off the then-No. 13 Hokies 49-35, fans streamed on to the field in celebration. ODU is 2-12 in its history against Power Five programs, but 2-2 against Tech.

Keshawn King ran for 111 yards and caught a touchdown pass from transfer quarterback Grant Wells for the Hokies. Wells also ran for a score, but threw two first-half interceptions, and then one to set up the decisive drive.

The Hokies were driving and trying to put the game away when Wells’ pass from ODU’s 40 bounced off of Jalen Holston to the Monarchs’ Ryan Henry. A 15-yard penalty against ODU moved the ball back to their 26 with 2:58 left, but a long completion by Hayden Wolff and then a defensive pass interference call near the goal line on Dorian Strong set the Monarchs up at the 1-yard line.

Wolff finished just 14 for 35 for 165 yards, but connected with Ali Jennings for 24 yards to start the winning drive, ran for eight yards on a fourth-and-1 from midfield and threw the pass to Jennings that made Strong draw the huge flag.

“Tonight was frustrating for them because they knew they could play better,” Rahne said. “You know, I think part of it was that they wanted to come out and play so well that they played a little tight. And that’s not who we are.”

Watson needed two tries to make it, but tumbled in with 33 seconds left.

There was no question that he was getting the ball, Rahne said.

“Not only was it his ball, but it was our offensive line’s ball,” he said. “I’ll put it in their hands as many times as I can.”

Wells, who threw a fourth interception on a desperation pass in the final seconds, wasn’t the only one with an auspicious debut for the Hokies. They were whistled for 14 penalties for 100 yards and had five turnovers.

“I am surprised we were sloppy and I felt like they pressed and you know, attention to detail, which showed up in the last scrimmage a little bit, just more penalties than we’ve been having,” Pry said.

“You want to make people earn it, and we didn’t do that.”

Virginia Tech: Wells showed ability with both his big arm and feet, bit that arm also had him overthrowing receivers by a lot, including the interception that led the ODU’s first field goal. He had 34 TDs and 22 interceptions in 23 starts at Marshall and Pry will want him to get more consistent quickly.

Old Dominion: The Monarchs lone touchdown before the decisive run by Watson was a gift when the snap on a 38-yard field goal try by Virginia Tech sailed well over the holder’s head and, in the scramble to recover the ball, ended with Robert Kennedy scooping it and taking it the final 25 yards.

UP NEXT Virginia Tech: The Hokies open their Atlantic Coast Conference schedule at home against Boston College.

Old Dominion: The Monarchs go on the road to play at East Carolina.