No. 2 Georgia’s Smart to face ex-boss in Samford’s Hatcher

After all, Hatcher gave Smart his first coaching job.

Smart will face his former boss when No. 2 Georgia plays Samford, coached by Hatcher, on Saturday its first home game since winning last season’s national title.

Georgia (1-0) lost 15 players to this year’s NFL draft, including five first-round selections from its defense. Even so, the Bulldogs looked strong in last week’s 49-3 runaway win over then-No. 11 Oregon in Atlanta.

Hatcher was Valdosta State’s coach when he hired Smart to coach defensive backs in 2000.

Hatcher said Smart has reloaded on defense despite returning only three starters.

“I think they’re very similar to last year, they’ve just got different names on the back of their uniforms,” Hatcher said “… It was hard for me to tell the difference from what I saw on tape from last year.”

One week after facing his former co-defensive coordinator, Oregon first-year coach Dan Lanning, Smart now will be looking across the field at another familiar face.

“Now it’s moving on to a guy I know a lot about and a program I have a lot of respect for,” Smart said of Hatcher. “And he’s done a tremendous job everywhere he’s been.”

Georgia’s deep offense, led by quarterback Stetson Bennett, was impressive in scoring touchdowns on its first seven possessions against Oregon.

Bennett completed 25 of 31 passes for a career-high 368 yards and two touchdowns. Backup Carson Beck also was efficient, passing for 71 yards with a score. Running back Kenny McIntosh led the Bulldogs with nine catches for 117 yards.

Samford, formerly known as Howard College, is 2-79-3 against current Southeastern Conference teams but Hatcher’s Bulldogs gave another SEC East team a major scare one year ago. Samford, a five-touchdown underdog, led 42-28 in the first half before losing 70-52 at Florida last season.

Bennett, now in his sixth season, was a walk-on at Georgia after being recruited by Hatcher at Samford. Bennett was named the Walter Camp national FBS offensive player of the week following his big game against Oregon.

Bennett was the offensive MVP in Georgia’s two wins in last year’s College Football Playoff and carried that momentum into this season’s opener. His success does not surprise Hatcher, who reminded reporters this week Bennett attended his quarterback camp while in middle school.

“He’s a tremendous quarterback, has great talent around him and he knows how to get them the ball on time so they can make great plays after the catch,” Hatcher said. “… Look, he’s an elite quarterback, I don’t care what anybody says.”

Georgia took a 42-14 home win over Samford in 2017. Georgia lists that game as the only previous meeting between the schools.

Running back Kendall Milton ran for 50 yards to lead Georgia’s ground game last week. He had rushing and receiving touchdowns.

“At the end of the day, we want to be a force in the different aspects of the game,” Milton said. “I’m super comfortable with that aspect. I’m super excited that we can open up the offense in multiple dimensions.” 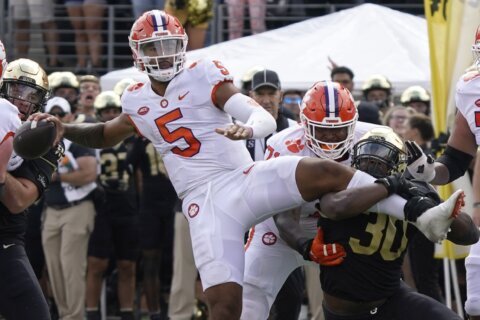