Jefferson’s opening week performance could earn more attention for the player who had the SEC’s second-best touchdown-to-interception ratio last year and was the leading returning rusher at the position in the conference..

Jefferson threw for 223 yards and three touchdowns and ran for another 62 yards and a score to lead No. 19 Arkansas to a 31-24 win over No. 23 Cincinnati on Saturday.

“Seems to me like when the game gets a little tighter, a little closer, when he’s really got to take over the game, he’s got the knack to do it,” Arkansas coach Sam Pittman said. “Seemed to me like most every time we need him to win the game, he makes some kind of play.

Jefferson established himself as escape-artist of sorts last year, his 240-pound frame proving difficult to take down. Little changed there as most of his yards on the ground came after contact against Cincinnati. Through the air, he built a rapport with tight end Trey Knox who caught two of the three touchdown tosses, including one that was quite literally a toss: a jump-pass from five yards to give Arkansas a 14-0 lead at halftime.

Cincinnati’s Ben Bryant, a transfer from Eastern Michigan, ultimately threw for more yards passing (325) and just one fewer touchdown, but an interception at the Arkansas 20 turned into a Razorbacks score on the next possession.

The pick was one of several mistakes the Bearcats made. Four of Cincinnati’s first-half drives ended in Arkansas territory, but the interception halted one and Ryan Coe missed two field goals, including one from 25 yards, as well.

Cincinnati had pulled within a touchdown on Bryant’s throw to Nick Mardner halfway through the third quarter and then recovered a Jefferson fumble inside his own 10 on the ensuing play. The Bearcats started three yards from the end zone, but four penalties later, including two for delay of game, they managed just a 25-yard field goal.

Arkansas followed with a 32-yard field three minutes later and Jefferson threw his third touchdown on the possession that followed, a 32-yarder to Knox, to rebuild the lead to 14 points.

Knox, a senior, was a starting wide receiver his freshman year and had 28 catches and three touchdowns, but had just seven catches his sophomore season in Pittman’s debut 2020 season. He moved to tight end and caught 20 balls as a junior last season. Saturday he had six catches for 75 yards and two touchdowns.

“He’s worked hard at tight end and he believes he’s a tight end. He is. He’s a good one,” Pittman said. “Coming off the field on his second TD and went down their side and I said ‘You happy you moved to tight end?’ Those are special moments because you never know if it’s going to work out.”

The Razorbacks were 9-4 last season, their best finish since 2011 .

“When Cincinnati was put on the schedule I was saying ‘why?’ to be honest with you,” Pittman said. “Am I tickled to death that we’re 1-0 and we beat Cincinnati? Yes. I don’t want to play them. We’ve already played them once. That’s plenty.”

Most of Arkansas’ big plays not involving Knox and Jefferson came from players picked up via the transfer portal. Domineck (Georgia Tech) and Drew Sanders (Alabama) had sacks. Dwight McGlothern (LSU) had Arkansas’ interception. Matt Landers (Toledo) started and caught three passes for 43 yards while Haselwood (Oklahoma) had three grabs for 42 yards and the score.

Cincinnati’s rally came in large part because of the passing game. Bryant took advantage of Arkansas losing starting nickel Myles Slusher and starting safety Jalen Catalon late in the second quarter and early in the second half.

Pittman said Slusher should be OK going forward, but he was less sure about Catalon. He did not disclose either injury.

Arkansas’ offense, with Jefferson at quarterback, is SEC worthy. The defense struggled in the second half after losing two starters from the secondary.

Cincinnati had the talent to win the game, but its mistakes were too plentiful against a quality opponent.

Arkansas should find itself comfortably still ranked ahead of its SEC opener next week.

Cincinnati is likely to fall out of the Top 25 despite a fair showing.

Arkansas opens SEC play against South Carolina at home in Week 2. The game will be South Carolina’s first in Fayetteville since 2013. 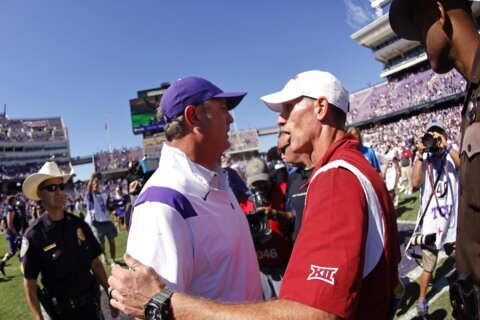