Line: Arkansas by 8 1/2, according to FanDuel Sportsbook.

This is the Southeastern Conference opener for both teams. With difficult upcoming schedules, a win for either team would bode well for their ability to reach the upper half of their respective divisions. It has been penciled a “trap game” for Arkansas by many, following its season-opening win over a ranked Cincinnati team. A South Carolina victory would enhance the stakes of next week’s SEC East clash against No. 2 Georgia, while a win would put the Razorbacks in position to enter their Sept. 24 game against No. 6 Texas A&M undefeated.

Arkansas led the SEC in rushing last season, averaging 227.8 yards per game. South Carolina was near the bottom of the conference against the run, giving up nearly five yards per carry. The Razorbacks ran for 224 yards against Cincinnati this past week, while the Gamecocks gave up 200 on the ground to Georgia State. Behind a big, veteran offensive line, Arkansas is likely to be run-heavy against South Carolina.

South Carolina: QB Spencer Rattler makes his long-awaited SEC debut against a depleted Arkansas secondary, which gave up 325 passing yards to Cincinnati in Week One. He transferred from Oklahoma in the offseason. In his first game with the Gamecocks, Rattler completed 23 of 37 passes for 227 yards and one touchdown, sandwiched between a pair of interceptions.

Arkansas: TE Trey Knox was recruited out of high school in 2019 as a sure-handed, four-star wide receiver. His yardage total dipped from 385 in his freshman season to only 70 in his sophomore campaign. He transitioned to tight end and the move has paid dividends. In the season opener against Cincinnati, Knox hauled in six catches for 75 yards and two touchdowns.

Arkansas has not beaten South Carolina since 2011, the last time a top-10 matchup was played inside Razorback Stadium. … The teams haven’t played since 2017, the series’ largest gap since they joined the SEC together in 1992. … Arkansas coach Sam Pittman and South Carolina coach Shane Beamer coached at Georgia together for two seasons under Kirby Smart. … Arkansas QB KJ Jefferson combined for four touchdowns in the season-opening victory over Cincinnati. … South Carolina scored two touchdowns off blocked punts in a 35-14 win over Georgia State. 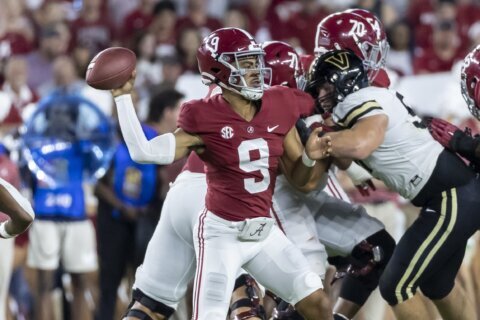