He couldn’t have made a stronger first impression.

The Hoosiers new starting quarterback threw one touchdown pass then finished the game by leading his team on a 75-yard drive, capped by Shaun Shivers’s 1-yard touchdown run with 23 seconds left to give Indiana a stunning 23-20 victory over Illinois on Friday night.

“That’s who he is, he’s extremely poised and it showed when you have to find an open receiver and show some poise,” coach Tom Allen said. “He just did what we needed to do. The bottom line, last time I checked, is we got more points than they did.”

No, it wasn’t pretty and it certainly didn’t go according to script.

But after eight straight losses and going winless in Big Ten play last year, this season and conference opener meant plenty for the Hoosiers and Bazelak, who transferred from Missouri. It was a relief.

“I know I wasn’t here last year, but these guys had a bad taste in their mouth,” Bazelak said. “I’m just excited we got a win tonight, 1-0.”

It was a frustrating finish for the Illini, who took the lead early in the third quarter and didn’t trail again until Shivers’ scoring run.

Still, it wasn’t enough in a slugfest that included Brown losing one of two fumbles, multiple players being injured and a series of replay reviews that brought the second half to a stalemate. It featured just one score — DeVito’s go-ahead 16-yard TD pass to Brian Hightower early in the third quarter — until the final 2 1/2 minutes.

And there were plenty of missed opportunities including Indiana’s goal-line stand in the fourth quarter. The Hoosiers stopped Brown on three straight runs and coach Bret Bielema blamed himself.

“That fourth-down call, that’s on me to make a better decision. I thought we could go up two scores and obviously we failed,” he said. “This is something we have to adjust. It’s plan and simple. It’s the No. 1 thing we have to eradicate from this program. Before you can win, you’ve got to prevent yourself from losing.”

While Indiana struggled to stop the run, Bazelak carved up the Illinois secondary in the first half and again on the final drive. His first completion as a Hoosier went for 40 yards — more than Illinois yielded in last weekend’s entire game.

Bazelak added three more completions of 24 or more yards during the first two quarters including a 52-yard TD pass to D.J. Matthews Jr. that helped stake Indiana to a 16-10 halftime lead.

His first pass in the third quarter, though, bounced off the hands of receiver Andison Coby and was picked off by Kendall Smith. Five plays later, Hightower lunged across the goal line to put Illinois up 17-16.

“There’s a lot of power in finding a way to win a game like that … the positives and belief — and finally getting a Big Ten win in our first game,” Allen said. “To go 75 yards and no timeouts … Connor was awesome.”

Illinois: The offense dominated the game in total yardage and possession time while the defense allowed just 32 yards rushing. Normally, it would be a perfect winning script for the Illini.

Indiana: Linebacker Cam Jones challenged his teammates during the offseason and again Friday and the defense responded. If the Hoosiers continue to play this tenaciously, they’ll be competitive every week. The bigger question: Can the offense find its way consistently?

Illinois blew other chances, too. Hugh Robertson’s first two punts went 12 and 23 yards and the Hoosiers capitalized on those by scoring 10 points.

Midway through the second quarter, it appeared Hightower made a contested 29-yard TD catch. But the pass was ruled incomplete on the field and a replay review let the call stand. Illinois settled for a field goal, a four-point swing.

Though Jones, a three-year captain, finished the game after appearing to hurt his right leg in the third quarter, Allen said he didn’t know the severity of the injury. Starting right tackle Matthew Bedford left in the first half with what appeared to be an injured right knee. He did not return. Cornerback Jaylin Williams also left late with an injury.

Illinois: The Illini welcome Virginia to Champaign, Illinois, on Sept. 10. 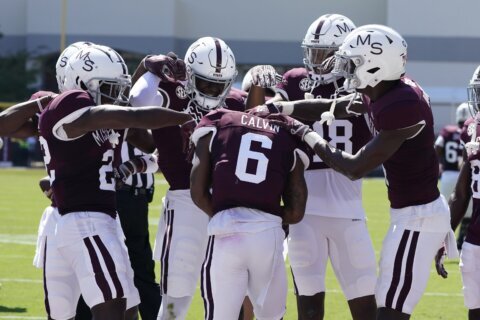 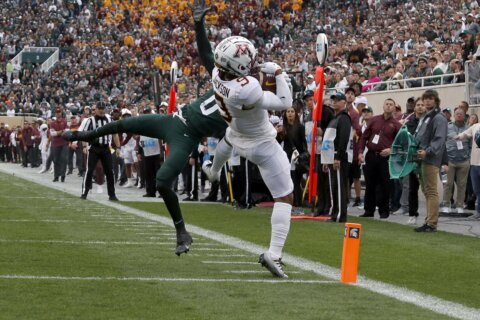