HONOLULU (AP) — Mike Wright factored into four touchdowns and Vanderbilt used a 35-point third quarter to pull away from Hawaii 63-10 in a season opener on Saturday.

The Commodores rolled up 601 yards of total offense, including 404 rushing to pick up their first win since Oct. 2, 2021. It was just the third victory under second-year coach Clark Lea.

Wright threw for 146 yards on 13-of-21 passing without an interception. Both of his touchdown passes went to Will Sheppard, covering 1 and 15 yards. Wright also ran for 163 yards and two scores, including an 87-yard touchdown, on only 13 carries.

Vanderbilt’s defense scored two touchdowns on fumble returns. Anfernee Orji snagged the first one out of the air after Maxwell Worship jarred it loose and returned it 28 yards to the end zone with 21 seconds left in the opening quarter. CJ Taylor scored from 14 yards out on a third-quarter scoop-and-score after Elijah McAllister forced the fumble.

“Obviously pleased with the result tonight. Feels like we have a team that came out and handled some early adversity and I thought we really played well as a team,” Lea said. “I thought we really battled back and the pain that we went through a year ago and having early setbacks there was a different feel on the field.”

“This first game I know these guys were excited to play. Their intentions were in the right place and they played pretty good coming out the gate and (over) time things started to happen and the result is what it is and so for me it’s back to the drawing board,” Hawaii first-year coach Timmy Chang said.

Vanderbilt led 21-10 at halftime in the first match-up between the teams. It was the Commodores first win to open a season since 2018.

Vanderbilt: After it averaged just 15.8 points and 312.6 yards per game, Saturday’s prolific production is a promising sign for a team that lost its final seven games of 2021 and was picked by league media to finish last in the SEC East this fall.

Hawaii: The first game of the Chang era was far from pretty, but after a tumultuous off-season that saw the resignation of Todd Graham following a large amount of outgoing transfers — including a number of starters — optimism around the program and support for its former record-setting quarterback should remain throughout his first season as coach at his alma mater.

Vanderbilt: The Commodores return home to host Elon on Saturday. 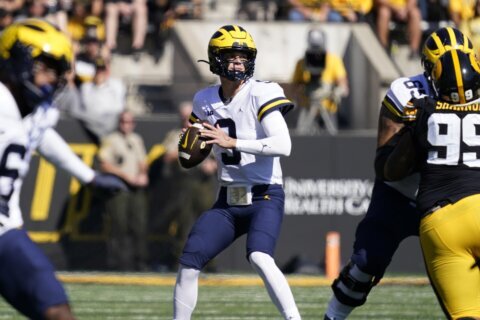