MANHATTAN, Kan. (AP) — Kansas State coach Chris Klieman likes to tell a story from late April or early May, back when his program was conducting a youth football camp, and he found himself watching running back Deuce Vaughn sign autographs for kids.

“We had a session that ended at 11:30 and the autographs were 11:30 to 12:00, and then there was a break for the players,” Klieman recalled with a smile. “As you can imagine, Deuce’s line was really, really long, and he stayed out there for an extra hour signing for every kid that was there, and taking pictures.”

Klieman paused for a moment, then added: “He knows the gig.”

It comes with stardom.

Vaughn is perhaps the most important player for a Kansas State team many have pegged as a dark-horse contender for the Big 12 championship. He was third in the league in rushing last season behind Baylor’s Abram Smith and Iowa State’s Breece Hall, both of whom are now making their way in the NFL, and is a preseason All-American as an all-purpose player.

“Yeah, the kid is talented,” Klieman said, “but it just doesn’t happen. It’s doing all the little things on the field, off the field, in the classroom, in the community, in the weight room, in the rehab center so that you have your body at the very best, and then doing it with an absolute smile on your face no matter what.”

The path to greatness was never a sure thing for the player associate head coach Van Malone calls “Mr. Electric.”

Coming out of Cedar Ridge High School in Round Rock, Texas, Vaughn was largely overlooked by most major programs, which tends to happen when you’re a (generously listed) 5-foot-7 prospect. It didn’t matter that Vaughn had piled up yards and touchdowns like cords of firewood.

Missouri offered him a scholarship. So did Arkansas and South Florida. And if he was interested in a military career, he would have been happily accepted at the Air Force Academy and West Point.

Otherwise, his best chance to play Division I football came from Kansas State.

Back when Vaughn was just a tot, a similarly built dynamo drove south from Iowa and spent the next four years terrorizing the Big 12. Darren Sproles proceeded to rewrite just about every rushing record at Kansas State, finishing fifth in Heisman Trophy voting as a junior and then parlaying his senior year into a career in the NFL, where he would spend 15 years.

“I will say that ever since I was little,” Vaughn said, “I always looked at the All-American status of players, and you see all these big names and he was an All-American. He was one of the best in the nation, and that was something I always wanted to do whenever I got to this level. So to be able to achieve that is astonishing.”

Quickly earning the starting job, Vaughn ran for 642 yards and seven scores while catching 25 passes for 434 yards and two more, giving Kansas State fans a reason to celebrate amid a 4-6 record during the pandemic.

He gave them reasons on a weekly basis last season. Vaughn ran for 1,404 yards and 18 touchdowns, caught 49 passes for 468 yards and four more touchdowns, and helped the Wildcats go 8-5 with a Texas Bowl win over LSU.

Vaughn ran for 146 yards against the Tigers — his sixth straight 100-yard game — and scored four TDs in all.

He won’t have to wait long to begin making a national impression this season, either.

After the Wildcats open with South Dakota on Sept. 3, they face former Big 12 rival-turned-SEC nemesis Missouri. Then, after a tune-up against Tulane, they visit ninth-ranked Oklahoma for an early conference showdown.

“It’s the work ethic that you see with Deuce,” Klieman said. “I think everybody feeds off of his work ethic, whether it’s on the field, in the classroom, in the film room, in the weight room. The kid works so hard. And then you have your younger players watching arguably your best football player put the work in on a daily basis in all these areas.” 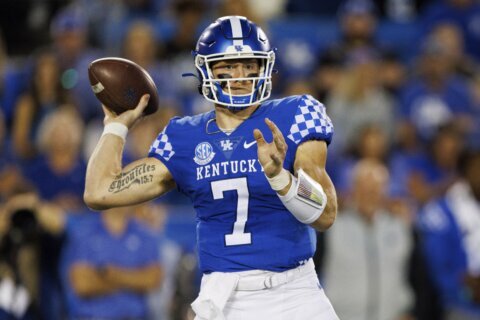