ACC preview: No. 4 Clemson aims for return to top of league

Fourth-ranked Clemson is determined to follow a year of change with a return to the top of the Atlantic Coast…
Listen now to WTOP News WTOP.com | Alexa | Google Home | WTOP App | 103.5 FM

Fourth-ranked Clemson is determined to follow a year of change with a return to the top of the Atlantic Coast Conference.

The Tigers saw their six-year run as champions snapped last year, then the Tigers lost coordinators on both sides of the ball to head-coaching jobs. Yet Dabo Swinney’s team is favored again ahead of teams like No. 13 North Carolina State, No. 16 Miami, No. 17 Pittsburgh and No. 22 Wake Forest.

“Not many guys on this team had really experienced anything other than winning championships,” Swinney said. “So we go into this with a different perspective. Is it any easier to win? I don’t think so.”

The Tigers’ “stumble” still came with double-digit wins for the 11th straight season, though they lost two ACC games – at N.C. State in double overtime and at eventual league champ Pittsburgh – for the first time since 2014.

If Clemson can get back to the top, that will mark its seventh ACC title in eight seasons. That’s would be an unprecedented run, re-kindling memories of Florida State’s tear through the league in the 1990s.

“We were blessed to come out with a 10-win season, win six in a row at the end,” offensive coordinator and quarterbacks coach Brandon Streeter said. “A lot of teams wish they could’ve been in our shoes.”

Clemson: The Tigers have won 59 of 64 games against ACC opponents dating to the 2015 season.

N.C. State: Dave Doeren’s Wolfpack posted the second-highest vote total among league teams to win the title with 17 returning offensive and defensive starters. But N.C. State must beat out Clemson in the Atlantic to reach the Dec. 3 title game in Charlotte. The Wolfpack’s No. 13 ranking matches the program’s best in the preseason AP poll set in 1975.

QB Devin Leary, N.C. State: The preseason league player of the year ranked among the national leaders in passing touchdowns (35), yardage and efficiency for a nine-win team.

WR Josh Downs, North Carolina: A big-play threat at all times, Downs had 1,335 yards and eight touchdowns receiving last year while ranking sixth in the Bowl Subdivision ranks in catches per game (7.8).

QB Malik Cunningham, Louisville: The veteran with 38 career starts is a dual-threat weapon who ranked fourth in FBS with 20 rushing TDs.

“It seems like forever ago,” coach Pat Narduzzi said.

Both are among significant losses at the offensive skill positions, though the Panthers have seven returning defensive starters that include preseason all-ACC picks Habakkuk Baldonado and Calijah Kancey up front.

The status of Wake Forest quarterback Sam Hartman is a story to watch. He was one of the nation’s top quarterbacks in leading a high-scoring offense for a team that won the Atlantic Division and reached the ACC title game, but he’s out indefinitely while being treated for a non-football medical condition.

That could mean third-year freshman Mitch Griffis or fourth-year sophomore Michael Kern opens the year as a first-time starter.

All four of the league’s new coaches reside in the Coastal Division with Cristobal, Elliott, Duke’s Mike Elko and Virginia Tech’s Brent Pry. All but Cristobal are first-time head coaches, adding another variable to the always-unpredictable Coastal Division race in the final season for the league with its two-division format.

Clemson at Wake Forest, Sept. 24: The Tigers visit the Demon Deacons in a key matchup for the Atlantic Division race.

Sign up for the AP’s college football newsletter: https://bit.ly/3pqZVaF 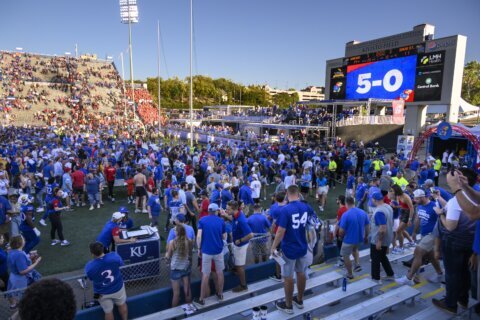