STATE COLLEGE, Pa. (AP) — Penn State quarterback Sean Clifford considers himself a good communicator, but he’s found connecting with his younger teammates to be a bit tougher this spring.

He attributes it to the age gap. Now in his sixth season with the Nittany Lions and fourth as their starter, Clifford said he feels like an “old man” at 23 since he’s surrounded by so many fresh-faced 18- and 19-year-olds.

“It’s a different generation,” Clifford said. “It really is. When I ask, ‘Hey, what’s your number?’ They’re like, ‘Hey can I get your Snapchat?’ I’m like, ‘Is this how we communicate these days? Give me an email or something!’ It’s funny.”

Minus that, spring ball has been pretty smooth compared to what Clifford is accustomed to. For the first time in what seems like forever, he didn’t have to start a new year by learning a new playbook. Penn State has had four offensive coordinators and three quarterback coaches since Clifford arrived on campus in 2017.

Clifford got banged-up down the stretch but still completed 61% of his passes for 3,107 yards with 21 touchdowns and eight interceptions. Penn State finished 26th in passing offense.

That’s in the rearview mirror.

Clifford already feels the offense trending in that direction, even if the Nittany Lions only played with a handful of healthy offensive linemen this spring.

“I’ve always had to re-learn offense or learn a new one,” Clifford said. “Now, being able to be in the same one back-to-back years, it just makes my job a lot easier and really be able to master the offense in the spring instead of learn it in the spring and then do it in the fall. We’re so much farther ahead now.”

Penn State coach James Franklin believes Clifford had his most productive spring practice. His practice numbers were the best they’ve been in nearly every category.

Clifford had most of the last week of practice off to give freshmen Drew Allar, Beau Pribulla and Christian Veilleux more chances to work.

The Nittany Lions concluded their spring with a scrimmage on Saturday at Beaver Stadium. Clifford was sharp in the game’s 11-on-11 segment. He went 4 for 7 for 41 yards and tossed the game’s only touchdown pass — a tight swing to newcomer Mitchell Tinsley for 13 yards.

Tinsley, a fifth-year senior who transferred from Western Kentucky, even looked a bit Dotson-like on the play, wearing No. 5, snagging the ball in stride, and zipping through downfield blocks to score. He’s been rooming with Clifford and will join KeAndre Lambert-Smith, Parker Washington and a handful of tight ends as options for Clifford.

Clifford plans to hook up with all of them this summer and left the locker room on Saturday with an edict. 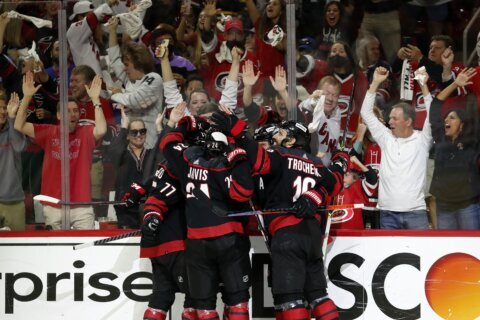