LOS ANGELES (AP) — It is not hyperbole to suggest UCLA’s game against Colorado on Saturday begins a three-week must-win stretch for the Bruins.

While the Bruins need only one more win to become bowl eligible for the first time since 2017, Chip Kelly’s tenure in Westwood is at a crossroads. UCLA got off to a 5-2 start, including a Sept. 4 victory over then-No. 16 LSU, but losses against Oregon and Utah have the Bruins reeling,

The two-game losing streak has also diminished any goodwill Kelly built up early in the season. He goes into Saturday’s game with a 15-25 mark at UCLA, which is not what was expected when he signed a five-year, $23.3 million contract in 2018.

The Bruins (5-4, 3-3 Pac-12) are 17-point favorites, according to FanDuel Sportsbook, and should be favored in their final two regular-season games against Southern California and California. A three-game winning streak would give UCLA an 8-4 record, a winning mark in conference play for the first time since 2015 and an appearance in one of the Pac-12′s top bowls.

However, a stumble down the stretch could mean a change. Kelly has a $9 million buyout, but that expires on Jan. 15.

Kelly didn’t discuss his future this week, only saying, “We’re 5-4. That’s our record, so that’s what we are right now.”

His players are also focused on the task at hand, which for many on the roster includes trying to get to a bowl game for the first time.

“We’re trying to win out, for sure, but it starts with this game against Colorado,” linebacker Ale Kaho said.

Colorado (3-6, 2-4) is coming in with momentum after a 37-34 double-overtime victory over Oregon State last week but it is likely too little, too late to save their bowl hopes this season.

DTR BACK IN LINEUP

Dorian Thompson-Robinson is expected to be back at quarterback for UCLA after missing the Utah game two weeks ago with a thumb injury. He is fifth in the Pac-12 in total offense, averaging 250.3 yards per game.

The junior had a big game against the Buffaloes last season, becoming the first player in UCLA history with 300 passing yards and 100 rushing yards in the same game.

Colorado is 128th out of 130 teams in the Football Bowl Subdivision in total offense, but the Buffaloes are starting to show signs of consistency.

Freshman quarterback Brendon Lewis has thrown six touchdowns in the past two games after having four in the first seven.

“It has slowed down where you’re seeing a lot of improvement from him in the passing game. We’re still leaving some offense out there,” Colorado coach Karl Dorrell said. “He’s not seeing everything in the way that we would want him to, but definitely he has grown so much from the beginning of the season.”

Running back Jarek Broussard, the reigning Pac-12 Offensive Player of the Year, had his first 100-yard game of the season last week with 151 yards on 24 carries. Broussard has only two touchdowns rushing and has not reached the end zone in the past seven games.

Dorrell returns to the Rose Bowl for the first time since he was fired as UCLA’s coach in 2007. Dorrell also played at UCLA, but isn’t feeling sentimental about the trip.

Colorado coaches have a 21-12 record against their alma maters. Dorrell’s first win last season was against the Bruins in Boulder. The Buffaloes, though, have dropped their last five at the Rose Bowl and haven’t won there since 2002.

KEEP AN EYE ON

UCLA’s running game. The Bruins are 5-0 this season when they rush for over 200 yards.

Zach Charbonnet, who is fourth in the conference in rushing, is averaging only 50 yards in the past two games after having five 100-yard games in his first seven. Brittain Brown, who is eighth, averaged 45 yards in losses to Oregon and Utah. 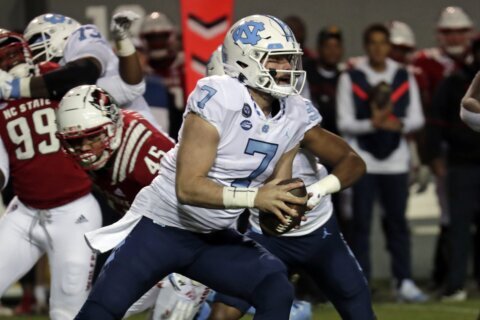 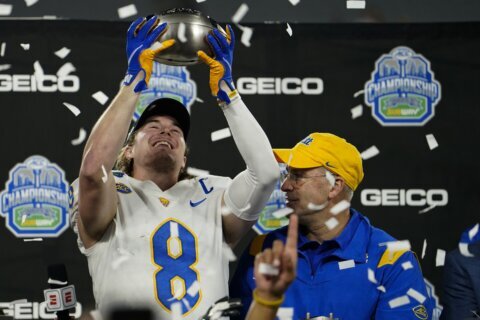