Tyler Badie is making the most of his first season as Missouri’s featured back. The senior from New Orleans is…
Listen now to WTOP News WTOP.com | Alexa | Google Home | WTOP App | 103.5 FM

Tyler Badie is making the most of his first season as Missouri’s featured back.

The senior from New Orleans is the only player in the country to run for at least 200 yards in four different games this season. His latest was Saturday, when he carried 34 times for 209 in a 31-28 win over South Carolina.

Badie came into the year having never run for more than 79 yards in any of his 34 career games.

He’s gone over 200 against Central Michigan, North Texas, Vanderbilt and the Gamecocks. Interestingly, his highest rushing total in his six other games was 81 yards. His 123.9 yards per game ranks first in the Southeastern Conference and fourth nationally.

Badie in his first three years at Missouri had primarily been a changeup from starter Larry Rountree, now a rookie with the Los Angeles Chargers.

Badie is among three SEC players since 2000 to record four 200-yard games in a season and is the first to do it nationally since Oklahoma State’s Chuba Hubbard and Wisconsin’s Jonathan Taylor in 2019.

Badie has 1,239 rushing yards this season and needs 340 over the next two games and a possible bowl to break Devin West’s single-season school record of 1,578 in 1998.

Also turning in 200-yard rushing games this past week were UNLV’s Charles Williams, who had 266 on 38 carries against Hawaii on Saturday and Central Michigan’s Lew Nichols, who had 215 on 43 runs against Kent State on Wednesday.

Nichols’ 43 carries matched Duke’s Mataeo Durant for most in a game this season. No one has had more attempts since 2017.

Jonathan Garibay of Texas Tech kicked the longest field in the FBS this season with his school-record 62-yarder as time ran out beat Iowa State 41-38.

The field goal was the longest in a game matching Big 12 teams and was Garibay’s second-game winner this season. His 32-yarder with 18 seconds left gave the Red Raiders a 23-20 win over West Virginia.

Garibay has made 12 straight field goals, one shy of the school record set by Clayton Hatfield in 2018.

Appalachian State has intercepted eight passes over its last three games and returned four for touchdowns.

Trey Cobb had two interceptions in a 31-7 win over South Alabama, including a 100-yard pick-six.

Ohio State also has run back four interceptions for TDs this season.

Kansas’ point total in its stunning 57-56 overtime win at Texas was the Jayhawks’ highest in a road game in program history and highest anywhere since rolling up 76 against Nebraska in 2007.

HE DOES IT ALL

Samford’s Montrell Washington had touchdowns rushing, receiving and on a kickoff return in his team’s 70-52 loss at Florida. According to ESPN, Washington was the first FCS player since Villanova’s Brian Westbrook in 1998 to accomplish that feat against a current Power Five team.

A total of 18 Army players had at least one rushing attempt in its 63-10 win over Bucknell. That’s the most players on the same FBS team to get a carry in a game since at least 2000, according to Sportradar. 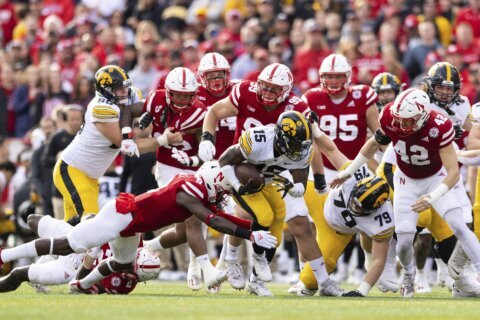 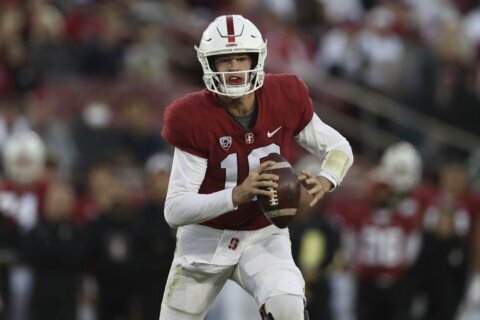