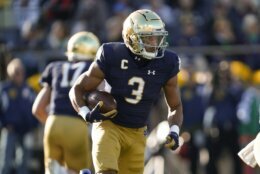 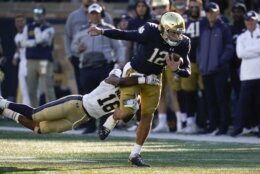 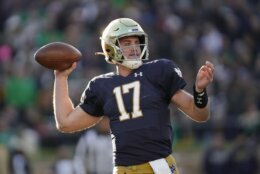 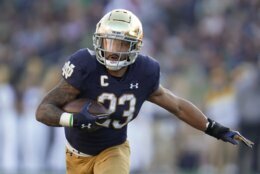 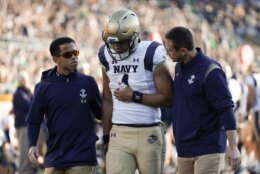 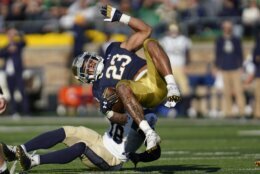 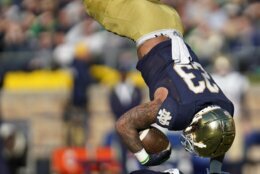 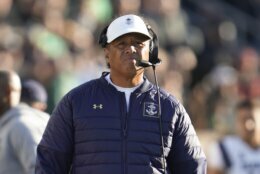 SOUTH BEND, Ind. (AP) — After getting an earful from Notre Dame coach Brian Kelly, Jack Coan delivered the big blow — a 70-yard touchdown pass to Kevin Austin at the end of the first half — and the No. 8 Fighting Irish shut down Navy’s triple-option attack in a 34-6 victory Saturday.

“Coach was screaming at me because it was open the play before,” said Coan, a grad transfer from Wisconsin who completed 23 of 29 passes for 269 yards. “He told me to throw it there, so that’s exactly what I did. I followed his plan. When you can get the ball to a guy like Kevin Austin, he can take it the distance every time.”

The touchdown play ended a 5-play, 95-yard scoring drive that took one minute to complete and it provided a 17-3 halftime lead for the Irish (8-1, No. 10 CFP). It was one of six receptions for Austin, who totaled 139 yards for the game.

“It’s a difficult game to prepare for,” Kelly said after Notre Dame’s fourth straight victory of the season after its 24-13 loss Oct. 2 to No. 2 (CFP No. 6) Cincinnati, a team that Navy battled to a 27-20 home loss Oct. 23. “I’m extremely proud how the team prepared all week and the way they executed. We were detailed and focused.”

Kyren Williams ran for 95 yards and two scores as the Irish offense totaled 430 yards. Williams, who had a career-high 199 yards last week in a 44-34 shootout victory over North Carolina, scored on runs of 1 and 20 yards.

Grad nose tackle Kurt Hinish had a career-high 10 tackles after making just 14 in six games coming in. Notre Dame dominated the Midshipmen (2-7) with its size and physical play. Navy controlled the clock, with 34:33 of possession — but completed just one pass for 18 yards and rushed for 166 yards — 73 on 22 carries by fullback Isaac Ruoss.

“We couldn’t run the ball in the first half, and in the second half we had a hard time tackling,” Navy coach Ken Niumatalolo said. “We got worn down.”

Navy led 3-0 after the first quarter on the first of two field goals by Bijan Nichols. But the Irish scored 17 points in the second quarter – Jonathan Doerer’s tying field goal, Williams’ 1-yard TD run and the Coan-to-Austin’s touchdown aerial with 50 seconds remaining – for a 17-3 halftime lead.

“Giving up that late touchdown (in the first half) was tough because we deferred,” Niumatalolo said.

Navy: The Midshipmen struggled against Notre Dame’s physical front four. Back-to-back quarterback sacks of Lavatai by Hinish and Jordan Botelho forced Navy to settle for a 49-yard field goal by Nichols and a 3-0 first-quarter lead.

Lavatai then suffered a neck injury late in the second quarter and didn’t return. Arline replaced him and completed one of two passes for 18 yards but managed just eight yards on eight carries.

“We ate up so much clock and came away with nothing,” Niumatalolo said after the Midshipmen managed just two field goals with its time of possession advantage.

Notre Dame: After being held scoreless in the first quarter, the Irish outgained the Midshipmen 225-12 yards in the second quarter, including 158-0 through the air while scoring 17 straight points behind quarterbacks Coan and freshman Tyler Buchner, who alternated over the last three quarters.

Coan had two big completions to Austin in the first half – a 38-yarder completion to set up Doerer’s tying 24-yard field goal and then their 70-yard completion that put the Irish up 17-3 with 50 seconds left.

“It helped,” Kelly said. “I thought we handled the back half of the second quarter pretty good.”

“Jack’s been the same guy every single day since he’s been here,” Austin said. “He has ability to make plays like that every single time and we trust him to do that.”

Notre Dame lost grad slot receiver Avery Davis with a knee injury late in the game. The Irish already are thin at the wideout positions with Lawrence Keys III in the transfer portal. Kelly expects to know more about Davis’ injury Sunday. Navy, meanwhile, elected to keep Lavatai out of the second half.

Notre Dame could move up a bit in The Associated Press poll with Purdue’s 40-29 victory over No. 5 Michigan State (CFP No. 3). The Irish also should move up in the College Football Playoff (No. 10) rankings with (CFP No. 9) Wake Forest’s 58-55 loss to North Carolina.

Notre Dame: At Virginia next Saturday. 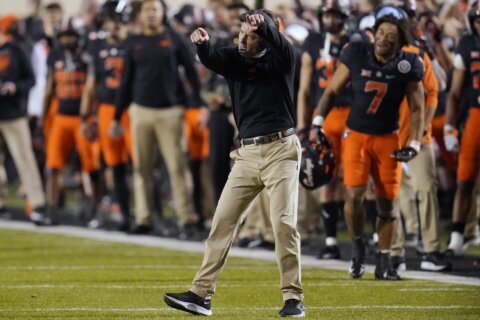