“I got lucky,” Anderson said. “We never stopped battling at the end. We just executed when we needed to. It feels really good. It’s definitely nerve-wracking having it come down to the last drive.”

The victory means Army can do no worse than a tie for the Commander-in-Chief’s Trophy, which goes to the service academy with the best record in round-robin competition. Army will retain the prize whether it wins or loses against Navy in December as Air Force defeated the Midshipmen earlier this season. Army came in having won three of the past four trophies.

“That trophy that we’re fighting for, every team is desperate to win it to get it in their trophy case,” Army coach Jeff Monken said. “I am really proud of these guys.”

Air Force tied the game on Matthew Depore’s second field goal of the game, a 30-yarder with 23 seconds left in regulation. They had reached the Army 11 before a 15-yard chop-block penalty stalled the drive.

After a scoreless first half, Army took the second-half kickoff and with the help of a 39-yard pass from Tyhier Tyler to Tyrell Robinson, scored on Tyler’s 9-yard run. Air Force responded with Dapore’s 39-yard field goal and Army came right back with a 79-yard pass play from Christian Anderson to Robinson and a 13-3 lead after three quarters.

Air Force closed the gap to 14-9 early in the fourth on Daniels’ 4-yard toss to Dane Kinamon with the key play on the drive a 31-yard completion to David Cormier.

Air Force and Army came in as the nation’s top two rushing teams but turned to the pass in the second half. Air Force outgained Army 401-322 in total yards, including 226-214 in the air. Robinson had 118 yards receiving for Army while Brandon Lewis had 106 for the Falcons.

“When we throw the ball and have to throw the ball, it’s usually not a great formula for us to win because we are a running football team,” Monken said. “We try to control the clock and keep away from the other team. They were the same way. They went to the air and had a lot of success.”

Army snapped a three-game losing streak in the game that was played at the Texas Rangers’ Globe Life Stadium, the first time these teams have met at a neutral site since 1965. 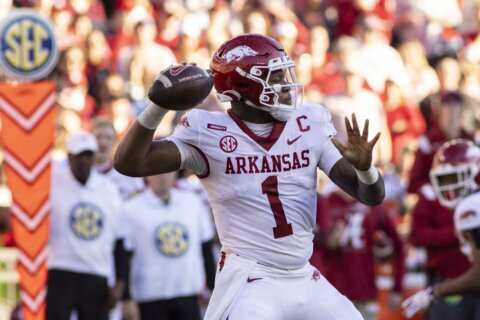