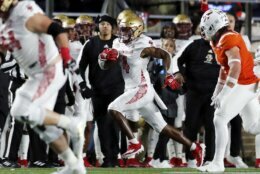 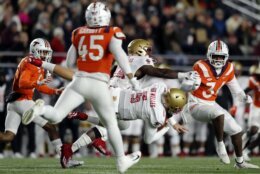 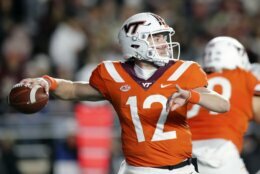 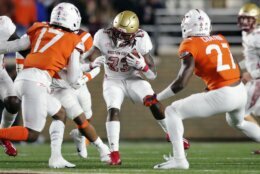 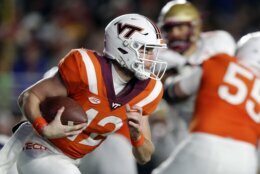 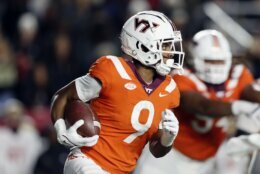 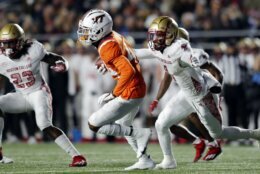 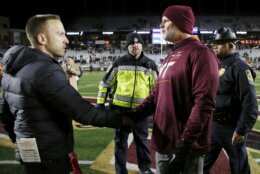 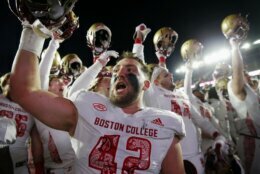 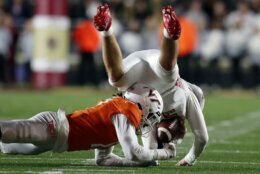 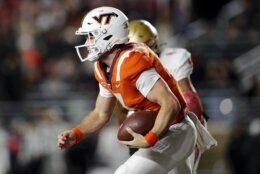 After that, coach Jeff Hafley knew his QB would be fine.

Jurkovec ran for a touchdown in his return, and the Eagles halted a four-game losing streak with a 17-3 victory over Virginia Tech on Friday night in their annual red bandana game.

Jurkovec, who injured his throwing hand in Week 2, was thought to be lost for the season after surgery. He completed just 7-of-13 passes for 112 yards, but gave the Eagles (5-4, 1-4 Atlantic Coast Conference) a spark after the offense sputtered in his absence by recovering a fumble on their first drive and scoring the TD.

“I called him in and I would have said that’s a 50-50 chance with the amount of reps he was going to take,” Hafley said. “I didn’t want to do anything to jeopardize or get him hurt. We wanted to guide him, and he walked in and said: ‘I’m playing.‴

The 6-foot-5 junior was sent sprawling to the ground on a run on BC’s third offensive play.

“We wouldn’t have let him play if we didn’t feel confident about him getting hit and getting hurt,” Hefley said. “Maybe part of me (was concerned), but when I saw him bounce up and the look in his eye, we felt good about that.”

Virginia Tech quarterback Braxton Burmeister left with an undisclosed injury in the first quarter and didn’t return. He threw just one incomplete pass before the injury.

“We made basically no plays in the passing game,” Virginia Tech coach Justin Fuente said. “You have to play better on the road in an environment like that to deserve to win the game.”

A former lacrosse player who was working in the World Trade Center on Sept. 11, 2001, Crowther died helping to rescue people during the attack. Survivors identified him by his signature red bandana.

Jurkovec completed his initial pass before getting picked off on his next.

But, in an interesting turn, Virginia Tech defensive back Dorian Strong fumbled on the return and Jurkovec recovered it, with the Eagles gaining 22 yards on the possession change when they got the ball back at the Hokies’ 13.

“I knew if I was going to come back that I couldn’t play tentatively,” Jurkovec said. “I said a few prayers and went out and did it. I ran out like I can. You can’t run without confidence.”

Two plays later, Jurkovec scampered around the left side for an 8-yard TD that moved BC ahead 7-0.

“They didn’t do anything different,” Fuente said. “We didn’t know who was going to play quarterback, including Jurkovec.”

Jurkovec, who transferred from Notre Dame before last season, threw for 2,558 yards last year, the most ever by a BC QB in his first 10 games.

Jurkovec also was in the middle of scrum midway into the second quarter. He ran for 17 yards before a late hit out-of-bounds by defensive back Dax Hollifield. After Hollifield collided with and pushed Hafley, Jurkovec charged in front of his coach toward Hollifield.

“That was kind of like the heat of the moment,” Jurkovec said. “Coach did kind of get pushed, but everyone kind of jumped in.”

Virginia Tech: Despite losing its starting QB, the dismal showing certainly won’t help quiet calls for Fuente to be replaced unless the Hokies finish strong in their final three conference games.

Boston College: What looked like it was going to be a lost season, could be taking a sudden turn with the return of Jurkovec.