Jackson reflective as Louisville retires his No. 8 jersey

LOUISVILLE, Ky. (AP) — Lamar Jackson was all smiles and even a little reflective as Louisville retired his No. 8…
Listen now to WTOP News WTOP.com | Alexa | Google Home | WTOP App | 103.5 FM

LOUISVILLE, Ky. (AP) — Lamar Jackson was all smiles and even a little reflective as Louisville retired his No. 8 jersey.

The 2016 Heisman Trophy winner joined Johnny Unitas on Saturday as the program’s only players to have their jerseys retired. Their numbers were placed at opposite ends of Cardinal Stadium’s east upper deck, with Unitas’ 16 unveiled before Louisville’s 41-3 victory over Syracuse, with a stiff wind ruffling the tarp over Jackson’s No. 8.

That not-so-subtle peek didn’t dampen the moment Jackson’s name and number were unveiled in a halftime ceremony.

“I’d just like to thank my teammates. They were with me every step of the way, every game,” Jackson said afterward.

Saturday was Lamar Jackson Day, with reminders of the dynamic QB all around the stadium.

The street in front of the Cardinals’ Howard Schnellenberger training complex was renamed Lamar Jackson Way and featured red-and-white speed limit signs of 8 mph. His number was painted on both 25-yard lines.

Video replays showed some of Jackson’s highlights — including Jackson hurdling a Syracuse defender on a memorable touchdown run — along with tributes from former Louisville teammates and his current teammates with the Baltimore Ravens.

Jackson entered the stadium to cheers with 8:19 left in the second quarter. He then walked to midfield behind a podium with his number and his Heisman Trophy on top.

He recalled his 2015 debut against Auburn, which began with an interception and included other first-game jitters.

“You all didn’t boo,” he said to the crowd as he recalled highlights such as beating Florida State and rival Kentucky his final season. “I really appreciate y’all.”

Louisville wide receiver Tyler Harrell, who caught a 33-yard TD pass in the first quarter, and defensive lineman Henry Bryant will wear No. 8 through the end of the season before it is officially retired. 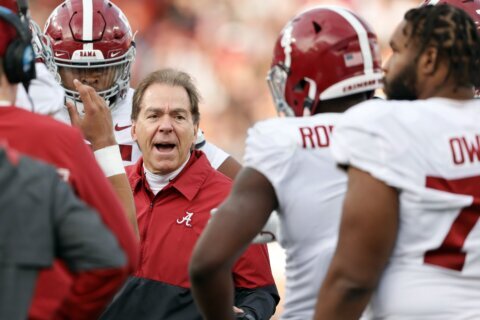 No. 1 Georgia looks to become top dog over Alabama in SEC 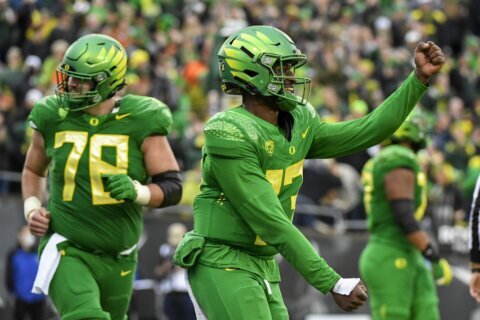 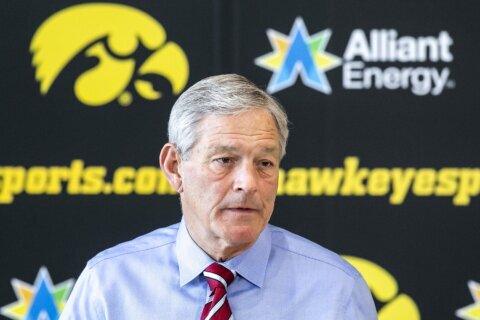 No. 2 Wolverines, No. 15 Hawkeyes play for Big Ten title