BERKELEY, Calif. (AP) — California’s game against Southern California was postponed on Tuesday after a series of positive coronavirus tests in the Golden Bears program, the first major college football game to be rescheduled this season because of COVID-19.

Cal played last week at Arizona without starting quarterback Chase Garbers and six other starters because of positive tests that knocked out 24 players and assistant coaches. The Bears lost 10-3 to Arizona.

Cal announced Tuesday that a few additional players tested positive this week, leaving Cal with not enough players at an unidentified position group, leading to the postponement.

“It left us with an inability to compete safely,” athletic director Jim Knowlton said, leading to what he called the “difficult decision” to move the game.

Coach Justin Wilcox said he was upset for the fans and the players but added there was no choice.

“Postponing this game was a last resort and not an action any of us wanted to take; however, it was not possible for us to field a team on Saturday,” Wilcox said.

The game could have been declared a forfeit under Pac-12 rules, but Cal and USC came to an agreement to move the game to Dec. 4, the day after the Pac-12 championship game.

“We’re excited that both USC and Cal could agree that we still want to play this game,” Knowlton said. “We want to do it for our student-athletes. It’s really important because it’s our last home game and it gives us a chance to celebrate our seniors.”

Knowlton said he anticipates Cal being able to resume practice next week and play the Big Game against rival Stanford as scheduled on Nov. 20.

Cal’s ordeal started last week when a symptomatic player tested positive for COVID-19. Cal had not been regularly testing asymptomatic players throughout the season but began testing close contacts and eventually the entire team, leading to the two dozen positive tests.

Garbers criticized school and Berkeley city officials in a Twitter post Monday night, saying they had not been transparent over whether COVID-19 tests for vaccinated players are recommended or mandated.

“We have worked too hard to have someone take this all away from us. It is wrong,” Garbers wrote. “We deserve answers and transparent communication.”

Knowlton said it was ultimately his call based on recommendations from city health officials to require asymptomatic players to test or otherwise be prohibited from playing.

“It couldn’t be any more confusing during these times where you’re trying to figure out how to do the right thing and what is the right thing,” Knowlton said. “I applaud our student-athletes for being vocal and wanting to know what’s going on. The bottom line for us is that (Berkeley health officials) gave us recommendations and we implemented those recommendations to keep our kids safe.”

Cal said 99% of its players are vaccinated but several have tested positive anyway and are required by the city to isolate for 10 days regardless of vaccination status. Knowlton said he asked whether it was possible to test out of that isolation like some pro teams have done but was told that wasn’t allowed.

Knowlton acknowledged that Cal may be operating under more stringent protocols than other schools because of guidance from Berkeley health officials but didn’t question their advice.

USC interim coach Donte Williams said his team found out about the postponement prior to practice on Tuesday. Since the Trojans don’t have to prepare for the Bears, they shortened their workout Tuesday and will spend the rest of the week preparing for their rivalry game against UCLA next Saturday.

At 4-5 overall, 3-4 in Pac-12 play, USC must win two of its final three games to become bowl eligible. Williams said there was no interest in seeking a forfeit by Cal, which would have left USC needing just a win at home against the Bruins or No. 14 BYU on Nov. 27 to reach the postseason.

“We want to play the game, and a forfeit is not the way to go, and that’s not the way you want to qualify for a bowl game,” Williams said. “Our whole thing is fighting on and competing, right, that’s our biggest thing is competing and I’m pretty sure they want to compete against us so we look forward to the opportunity.” 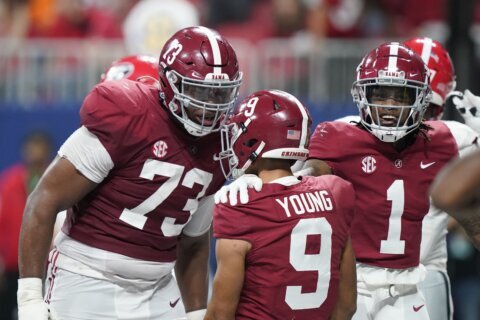