Coronavirus News: Fairfax Co. votes to increase substitute teacher pay | Is it time to get a COVID-19 booster? Which one? | Local cases of COVID-19 | How many in DC region are vaccinated?
Home » College Football » USC WR Drake London…

LOS ANGELES (AP) — Drake London has been the nation’s most productive receiver in the first month of the college football season, which means the Southern California star is getting hit a whole lot more than the average wideout.

But there’s nothing average about London, the 6-foot-5 former Trojans basketball player whose sole concentration on football this fall has propelled him to this monster start.

London isn’t worried about all of those hits he’s taking. In fact, he doesn’t think he’s the one who should be worried.

“Honestly, it isn’t necessarily punishment to me,” London said. “I think it’s punishment to them. I feel like when somebody tries to hit me, I want to make them feel me, and next time think about if they want to hit me or not. That’s my whole mentality.”

London has a physical, winning mentality on a .500 team in turmoil. He has already racked up 39 catches for 540 yards — both tops in the Football Bowl Subdivision — while scoring three TDs for the Trojans (2-2, 1-2 Pac-12), who head to Colorado on Saturday for the next stop on their roller coaster ride of a season.

London has been a model of consistency and production amidst the chaos of USC’s season. Whether catching passes from Kedon Slovis or Jaxson Dart, London is finding ways to get open and to keep the Trojans’ offense moving despite inconsistency from almost every other position.

London’s athleticism immediately stands out in every Trojans game. He avoids tacklers with a nimble spin move he’s broken out at least a dozen times already this season, and he has a distinct advantage on jump balls that comes from a very obvious source.

When asked about his game plan for those 50-50 balls, London says: “Just dunk on ’em. That’s pretty much it. Kedon puts the ball up in the air, and I’ll try to dunk on ’em and use that basketball background to my advantage.”

Interim head coach Donte Williams was the Trojans’ cornerbacks coach two weeks ago, so he has gone from instructing defenders on ways to stop London to relying heavily on the gifted pass-catcher to carry USC forward in this season of transition.

“He’s a beast,” Williams said. “I’ve said that from Day One, before the season started. I said, ‘That’s the Biletnikoff winner.’ Nothing is shocking me that he’s doing. I expect it.”

USC hasn’t had a Biletnikoff Award winner since 2012, when Marqise Lee racked up 118 catches for 1,721 yards and 14 touchdowns with coach Lane Kiffin and quarterback Matt Barkley targeting him early and often.

London is getting similar attention from offensive coordinator Graham Harrell and Slovis this season, and he’s capitalizing.

“I think he’s always been super talented,” Slovis said. “He’s probably a little bit better as time progresses, but I think people are just starting to notice more. Maybe not playing basketball has helped with that. I remember my freshman year, everybody was talking about (Michael Pittman Jr., Amon-Ra St. Brown and Tyler Vaughns), but we knew how special Drake was from the beginning.”

The Trojans used London as a slot receiver in his first two seasons in Harrell’s schemes while USC’s featured receivers were Pittman, who’s having a solid second season for the Indianapolis Colts, and St. Brown, now a rookie for the Detroit Lions.

London is now on the outside, where he gets guidance and mentorship from receivers coach Keary Colbert, a star wideout two decades ago on some of Pete Carroll’s best USC teams. Colbert and London both grew up in Los Angeles’ far-flung northwest suburbs: Colbert in Oxnard and London about 30 miles away in Moorpark.

“We’re going to try to finish it the right way,” Colbert said. “I think he’s focused on doing whatever he can to help our team, and he’s done a lot to help. We’ll add it up at the end and see where it falls, but he’s working hard every day.”

As to whether the Trojans are leaning on London too much to salvage their tumultuous season, London called it “a wide receiver’s dream to be targeted like that.”

“I don’t think it’s ever a worry to rely on a great player too much,” Williams added. “Did the Lakers rely on the guys they had too much, or did the Bulls rely on Jordan too much? That’s what you do if you want to win games.” 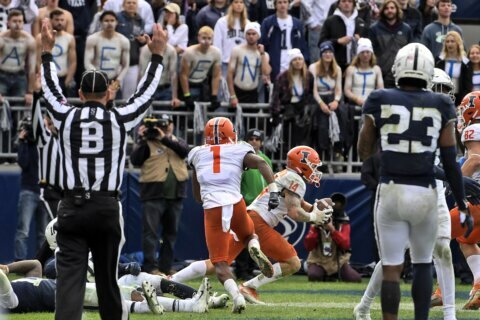 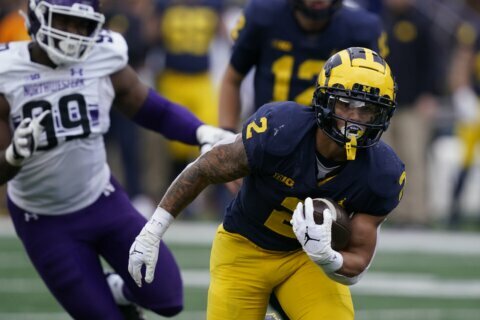