LOS ANGELES (AP) — Clay Helton always insisted Southern California would be able to find balance between the run and pass in its version of the Air Raid offense.

Three games after Helton’s dismissal, the Trojans finally found it with 218 yards rushing on 35 attempts in their 37-14 win at Colorado.

Now, USC wants to continue that success on the ground Saturday against a Utah defense that has traditionally thrived in making teams one dimensional.

“I don’t want it to be every other week,” running backs coach Mike Jinks said Tuesday. “I want it to be that, be our mindset, and that we’re going to make a difference each and every week.”

Texas transfer Keaontay Ingram led the way with 124 yards on 14 carries against the Buffaloes, with TCU transfer Darwin Barlow adding 61 yards on 10 attempts.

Barlow had impressed in training camp before sustaining a hamstring injury, which left the redshirt sophomore reduced to making his debut for USC (3-2, 2-2 Pac-12) in mop-up duty against Stanford. He had three carries for 22 yards and a touchdown in what would be Helton’s last game as head coach.

But with more time to get healthy since then, Barlow looked like a potential difference-maker against Colorado, giving USC a three-pronged attack with Ingram and redshirt senior Vavae Malepeai.

Interim coach Donte Williams was impressed with Barlow, who picked up three of the Trojans’ nine first downs gained by rushing. Williams described Barlow as “a big-time running back.”

Jinks was even more pleased with how Barlow came out of the game physically, calling his performance in practice Tuesday his best since sustaining the injury.

“I thought he looked good last week. Today, I saw him actually for a full practice really burst, so excited to see what it looks like on Saturday,” Jinks said. “Now, we got work to continue to put in today, throughout this week, but he’s starting to look like he did a little bit early on in fall camp.”

USC will need every available option to crack the Utes, who led the Pac-12 in rushing defense each of the previous three seasons and in five of the past six years. Utah hasn’t been as stout through its first four games this season, allowing 140.5 yards per contest, but Jinks warned his position group to expect a formidable challenge.

In spite of the success on the ground against Colorado, the general consensus was that USC could have been even better if not for a few breakdowns. Jinks pointed to a pair of third downs where too much dancing resulted in runs coming up short of keeping the chains moving.

“We left a lot of meat on the bone, to be honest,” Jinks said.

After challenging his tailbacks to bring a physical edge against Colorado, Jinks wants them to maintain it while adding the consistency USC has lacked during its up and down start. If they can, it would go a long way towards the Trojans getting consecutive wins for the first time in 2021.

“They were big (on defense), and it was a mindset that was gonna have to carry them in the game,” Jinks said. “I think they did that. … Now, it’s ‘can we build on that.’”

NOTES: QB Jaxson Dart was a limited participant in practice for the first time since undergoing surgery to repair a torn meniscus. Dart, a freshman who was injured in his collegiate debut at Washington State, warmed up with the team and threw some passes in position drills without moving. Williams said Dart remains week-to-week and needs to be cleared by doctors before doing more extensive work. 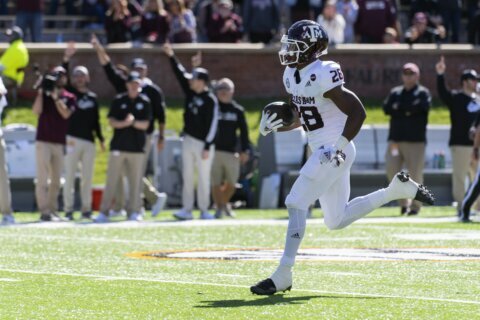