Robinson the engine behind the offense for No. 21 Texas

The Texas Longhorns running back is getting the ball a lot in 2021, early in games and late. That’s just what new coach Steve Sarkisian promised when the season began.

Robinson has been one of college football’s standout players over the first half of the season, delivering on the expectations that came with being the top-rated running back in the country coming out of high school in 2019.

Robinson ran for a career-high 216 yards and two touchdowns on 35 carries in the Longhorns’ 32-27 win last week at TCU. His fourth quarter against the Horned Frogs: 12 carries, 93 yards, seven first downs. The last two first downs on the final drive killed a TCU rally and ran out the clock.

Texas quarterback Casey Thompson called it a display of “big-boy football.” It certainly was a hammer blow.

“It’s fun to break a defense’s will,” Robinson said.

Robinson runs with a style as hard to define as it is to defend. Quick feet in tight spaces allow him to make cuts the instant his eyes find the smallest of gaps. At 6-feet, 215 pounds, he is compact and powerful enough to lower his shoulder into defenders and push for extra yards.

And once he hits the second level of a defense, he sheds tacklers with a strong stiff arm and spin moves.

“It’s just an instinct. You want to set them, get them off their feet and hesitating a little bit. Then you do it. They have no answer for it,” Robinson said. “When I’m just running the ball and I see a look in their eyes with a little uncertainty … I just read their eyes and just deliver it.”

Texas fans waited far too long to see all of this on display. Former coach Tom Herman recruited Robinson but kept him mostly on the sideline last season while the Longhorns’ offense mostly centered around quarterback Sam Ehlinger.

Robinson carried the ball 10 or more times in just four games last season but finished on a tear. In the final two games against Kansas State and Colorado, Robinson romped for 335 yards with an incredible 18.7 yards per carry average.

Sarkisian also told Robinson to prepare his body in the offseason to be ready for the physical punishment of playing more.

“We challenged him early on to physically and mentally prepare himself for those kind of games,” like TCU, Sarkisian said.

Robinson’s numbers would be bigger if he’d played more in romps over Rice and Texas Tech. And he’s too nice to criticize his light workload under Herman last season.

“At that time, it was still a slow process for me. They just wanted to take caution with how they used me,” Robinson said.

But those who saw how the season ended had a sense of what could be coming in 2021. Robinson was named a preseason All-American despite his previously limited college resume.

And he was quick to cash in when players were allowed to earn money off their name, image and likeness. One of his early deals was with a Texas barbecue restaurant that has locations in Houston and San Antonio.

It’s just one of several deals he said he has going. Robinson said he makes sure to not let them become a distraction away from the field. And he’s had to turn down some offers, like one from a beer company, which would not have been allowed under Texas law.

“I don’t drink, so it just wouldn’t have worked,” he said.

The only dent so far this season was a 69-yard performance in a 40-21 loss at Arkansas, the only time Robinson has been held under 100 yards this season. The Texas offensive line was pushed around so much that night that Robinson was constantly on the run in his own backfield.

Oklahoma ranks No. 7 nationally in rush defense, allowing under 80 yard per game.

Robinson carried just five times for 17 yards against the Sooners last season. He said he can run 30 times again Saturday if he must.

“I have enough” left, Robinson said. 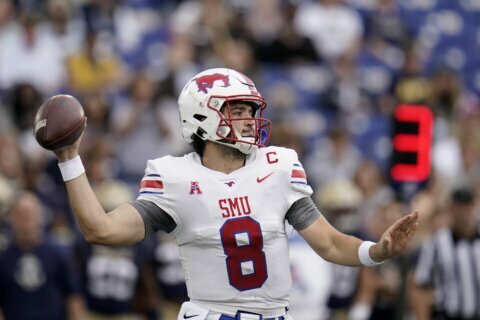