Coronavirus News: Fairfax Co. votes to increase substitute teacher pay | Is it time to get a COVID-19 booster? Which one? | Local cases of COVID-19 | How many in DC region are vaccinated?
Home » College Football » Penn St, Hawks play…

Line: Iowa by 1 1/2 points, according to FanDuel Sportsbook.

This is billed as the biggest game in Iowa City since the 1-2 matchup of the Hawkeye and Michigan in 1985. For Iowa, Penn State is the biggest obstacle in its path to the Big Ten championship game. The schedule softens after this. For Penn State, it’s game one on the toughest remaining schedule in the Big Ten. The winner puts itself in the top tier of College Football Player contenders.

Penn State QB Sean Clifford vs. Iowa pass defense. Clifford is completing better than 67% of his passes and has the third-highest passer rating in the conference. The Hawkeyes lead the nation with 12 interceptions, with six of them coming last week against Maryland. Clifford has been picked off once in each of his last three games.

Penn State: DE Arnold Ebiketie transferred from Temple and quickly established himself as the defense’s most disruptive player. His 22 quarterback pressures are by far the most on the team, according to Pro Football Focus, and he figures to be a problem for Iowa’s young offensive line.

Iowa: QB Spencer Petras hasn’t been flashy but he’s taken care of the ball, and that’s been good enough to keep the Hawkeyes unbeaten. He’s probably going to need to make some plays downfield to take pressure off a middling running game against an opponent that has allowed fewer than 70 yards on the ground in three of its last four games.

Penn State has won three straight in Iowa City, with the last two meetings there decided by a total of seven points. … . This is the first regular-season Big Ten game featuring two top-five teams that did not include Ohio State since No. 4 Michigan won at No. 2 Penn State in 1997. … Iowa has turned 16 turnovers into 75 points. The Hawkeyes’ defense has scored 20 points on two interception returns, a fumble return and safety. … Since the second half of the Sept. 4 game against Wisconsin, Penn State has scored in 18 consecutive quarters. 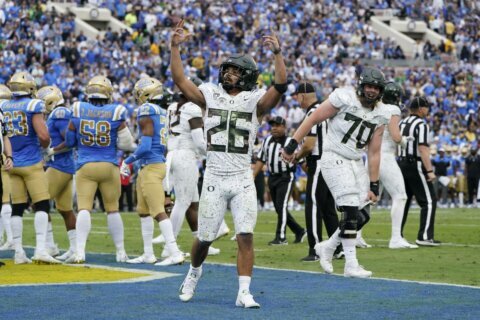 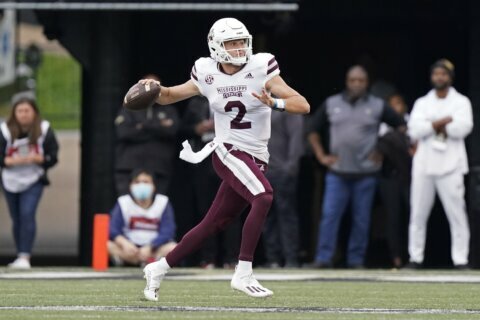