Line: Wisconsin by 3 ½, according to FanDuel Sportsbook.

Each team is trying to maintain control of its destiny in the Big Ten West Division race. Iowa still has hopes of reaching the College Football Playoff if it wins the rest of its games, including a victory in a potential Big Ten championship game matchup. Wisconsin seeks to earn its fourth straight victory and win back the Heartland Trophy, which Iowa acquired by beating the Badgers 28-7 last year.

Wisconsin RBs Chez Mellusi and Braelon Allen vs. Iowa’s run defense: Mellusi and Allen each rushed for at least 140 yards in a 30-13 victory over Purdue last week as Wisconsin attempted just eight passes. Allen has run for over 100 yards in each of his last three games. Iowa ranks seventh nationally in run defense and is allowing just 89.86 yards rushing per game and 2.73 yards per carry. If Iowa silences Wisconsin’s rushing attack, the Badgers will need to rely more on turnover-prone QB Graham Mertz to throw against the Hawkeyes’ ball-hawking secondary.

Wisconsin: LB Leo Chenal has 26 tackles – 8 for loss – and 4 ½ sacks over his last two games. Chenal ranks third in the Big Ten in tackles for loss (9 ½) this season. He’s averaging 10.2 tackles per game.

Iowa: C Tyler Linderbaum is an All-America candidate who will try to create running room for RB Tyler Goodson against Wisconsin’s top-ranked rush defense. The Badgers allow just 53.29 yards rushing per game and 1.87 yards per carry.

Iowa leads all Football Bowl Subdivision teams with 21 takeaways. … Wisconsin has committed 17 turnovers. Marshall is the only FBS team averaging more turnovers per game. … Iowa has intercepted 16 passes to lead all FBS teams. … Wisconsin had five takeaways against Purdue after totaling just four in its first six games. … Wisconsin has allowed the second-fewest yards per game (223.0) and yards per play (3.93) of any FBS team. The Badgers trail only No. 1 Georgia in both categories. … Wisconsin has averaged 293 yards rushing per game during its three-game winning streak. That’s the highest average of any Power Five team during that stretch. … Although Iowa beat the Badgers last year, Wisconsin has won seven of the last nine meetings in this series. 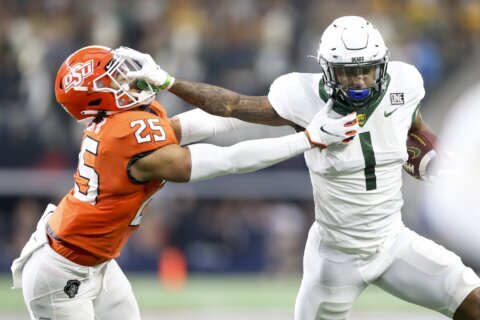 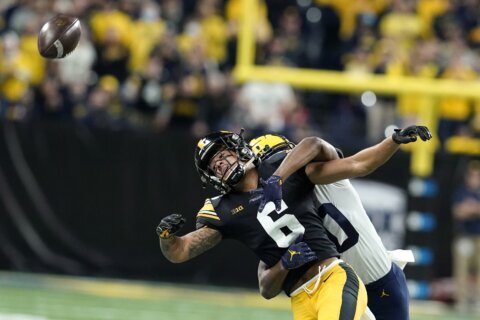