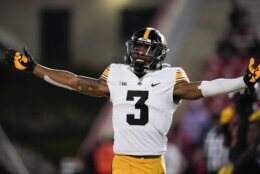 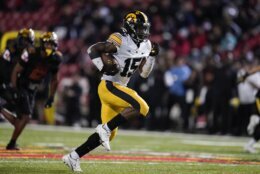 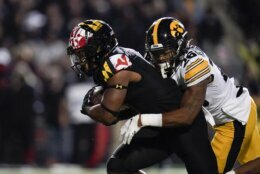 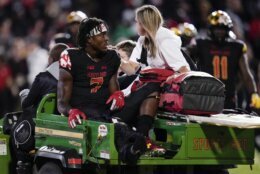 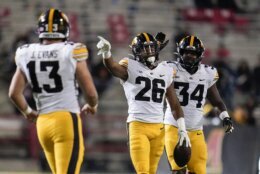 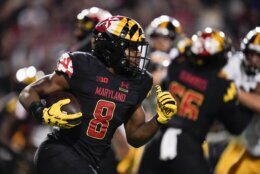 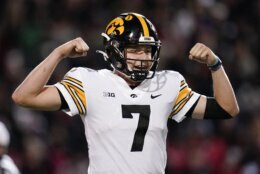 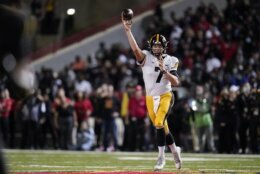 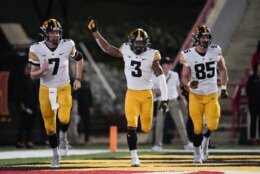 COLLEGE PARK, Md. (AP) — Spencer Petras barely had time to exhale in the second quarter. The Iowa quarterback would come off the field following a scoring drive — then immediately return after the defense forced yet another turnover.

“You sit on the bench for two seconds, you’re right back out,” Petras said.

Petras threw for three touchdowns and ran for two and No. 5 Iowa took advantage of seven Maryland turnovers in a 51-14 victory Friday night.

The Hawkeyes (5-0, 2-0 Big Ten) intercepted five of Taulia Tagovailoa’s passes, and they outscored the Terrapins 31-0 in the second quarter as Maryland completely unraveled. The Terps (4-1, 1-1) never recovered after losing standout receiver Dontay Demus to an apparent leg injury on a kickoff return early in the second.

Iowa beat Iowa State earlier this season thanks to a plus-four turnover margin on a day the Hawkeyes were badly outgained. The matchup with Maryland was an even more extreme version of that. The Terrapins turned the ball over five times in the first half, four in the second quarter.

Tagovailoa had thrown only one interception all season — while leading the Big Ten in yards passing — but he was picked off on the Terrapins’ second possession Friday in a sign of things to come. That turnover led to a field goal that opened the scoring, but Maryland responded sharply, driving 69 yards in eight plays and taking the lead on a 9-yard scoring pass from Tagovailoa to Chigoziem Okonkwo.

Iowa went ahead 10-7 on a 1-yard run by Petras on the first play of the second quarter, and then Maryland’s big night — the Terps had a chance to start 5-0 for the first time since 2001 — went sour for good.

Demus, the Big Ten’s leader in yards receiving, had four catches for 61 yards in the first quarter. On the kickoff after Petras’ touchdown, however, he fumbled and remained on the ground injured. He eventually left on a cart, and that turnover gave Iowa the ball at the Maryland 10.

“We took an X-ray of it,” Maryland coach Michael Locksley said. “Until we get the MRI, we’re not really sure, but it’s some type of lower-body injury.”

Petras threw an 8-yard TD pass to Arland Bruce IV. Then, on the first play of the Terps’ next possession, Tagovailoa’s deflected pass was intercepted, and the Hawkeyes took over at the Maryland 26.

“Just undisciplined football,” Okonkwo said. “The turnovers, beating ourselves. … That doesn’t help the defense at all. That’s really what it comes down to — turnovers, penalties, beating yourself.”

Petras made it 24-7 with a 1-yard scoring run. Then Tagovailoa’s next pass was picked off at the Maryland 45. Iowa scored again on Monte Pottebaum’s 2-yard run.

The final turnover of the half came on a Hail Mary by Tagovailoa on the last play. After two more interceptions in the second half — one thrown by Tagovailoa and one by his backup — Iowa now has 12 on the season. No other Big Ten team has more than five.

In the second half, Petras threw touchdown passes of 67 yards to Tyler Goodson and 7 yards to Tyrone Tracy.

Iowa: This was an emphatic win on a night the Hawkeyes figured to be tested by Maryland’s passing game. Iowa won’t be able to count on a deluge of turnovers every week, but the defense’s ability to force them made this a remarkably easy victory.

“I don’t think anybody could have seen that coming,” Iowa coach Kirk Ferentz said. “Their guy’s done a great job protecting the football.”

Maryland: There’s no way to sugar coat it: This was an exciting night for the Terps, the crowd was ready, and it went about as badly as it possibly could have. Maryland still seems to be making strides in Locksley’s third season, but he’ll have to hope his team learns from this experience.

Iowa scored on nine consecutive possessions during one stretch, although the turnovers meant some of the drives were pretty brief. In fact, the Hawkeyes averaged 35.5 yards on their six first-half scoring drives.

Tagovailoa’s performance was certainly surprising. Before the game, Pro Football Focus tweeted a stat saying the Maryland quarterback had 158 dropbacks and had not thrown a single turnover-worthy pass.

“We made some poor decisions, which hadn’t shown up all year long,” Locksley said. “I still feel pretty confident this is a group that will stick together and bounce back. We’re not going to let one game define us.”

Iowa can relax this weekend and see if any of the top four teams loses. Two of them — No. 1 Alabama and No. 2 Georgia — face ranked opponents.

Iowa: The Hawkeyes face a major showdown Oct. 9 against No. 4 Penn State.

Maryland: The schedule doesn’t get any easier for the Terrapins, who travel to play No. 11 Ohio State next. 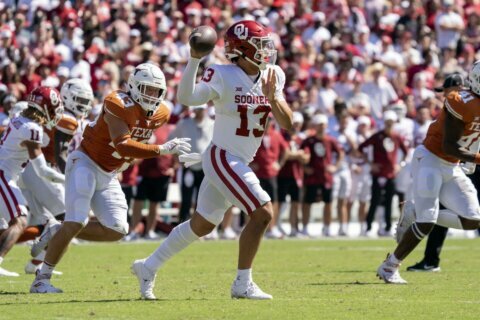