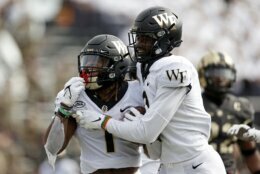 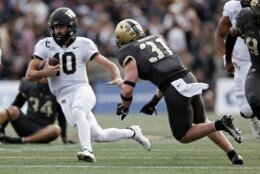 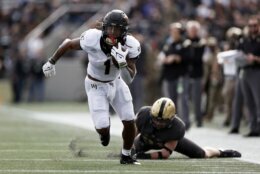 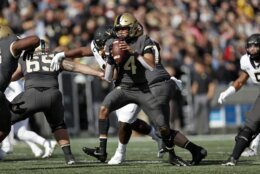 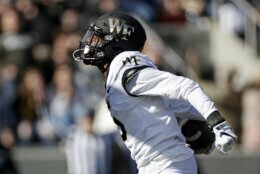 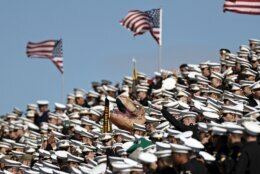 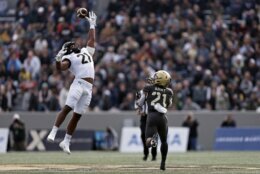 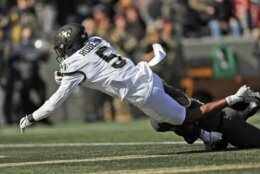 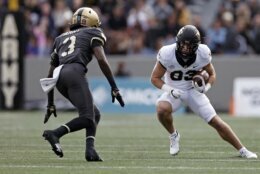 WEST POINT, N.Y. (AP) — When it was over, Wake Forest coach Dave Clawson used one word to describe it: “Wow!”

Sam Hartman threw for a career-high 458 yards and five touchdowns in a big-play display and ran for another score, and No. 16 Wake Forest defeated Army 70-56 on Saturday to remain unbeaten in front of a sellout crowd at Michie Stadium.

“It felt like whoever had the ball last was going to win,” Clawson said. “That was about as clean a performance as I’ve ever seen. Every time we had to make a play we made a play. We found a way to win.”

Army (4-3), which lost its third straight and had its 13-game winning streak at Michie Stadium snapped, had not defeated a ranked opponent since a 17-14 victory over Air Force in 1972. Still, the Black Knights made Wake Forest (7-0) earn this one, matching them on the scoreboard until a costly turnover.

Hartman was unstoppable and rarely pressured, completing 23 of 29 passes and hitting touchdown passes of 41, 54 and two of 75 yards as he matched the Michie Stadium record for scoring passes. Jaquarii Roberson had eight catches for 157 yards and three touchdowns and A.T. Perry had six catches for 146 yards and one score.

Army never led, and a costly interception return for a touchdown in the third quarter gave the Demon Deacons the breathing room they needed.

“Guys made plays and you make the throws and it works like that,” Hartman said. “That’s how this offense is supposed to do.”

Two touchdown passes by Army’s Jabari Laws, a 21-yarder to Isaiah Alston late in the third, and a 25-yarder to Tyrell Robinson midway through the fourth, made it a one-possession game again until Hartman scored on an 8-yard run with 6:57 left.

“The room for error is very small and that can cost a ballgame,” Alston said. “Proud of my guys. We put everything on the line … and just came up short.”

Army rushed for 416 yards and finished with 595 yards offensively as the teams combined for 1,233 yards in a game that featured just one punt and was the second-highest scoring game involving an Atlantic Coast Conference team, according to Elias Sports, after Pitt’s 76-61 win over Syracuse in 2016.

“Yeah, it was frustrating,” Army coach Jeff Monken said. “If I was a fan of football and just watching, that’s a fun offense to watch. I hate I had to watch it from our sideline.”

It was a one-possession game until the third quarter after Army knotted the score at 28-all on Jakobi Buchanan’s 1-yard touchdown run.

Hartman came right back quickl y, hitting Roberson over the middle for a 75-yard score.

The Black Knights then drove deep into Wake Forest on the ensuing possession and tried some trickery on a fourth-and-5. It backfired big-time when quarterback Cade Ballard, in his first play of the season, lined up as the holder and his pass into the left flat was intercepted by Traveon Redd, and he returned it 83 yards for a touchdown and a 42-28 lead.

“I saw green grass and I just took it,” Redd said.

Anthony Adkins raced 71 yards for an Army score and Hartman responded with a 75-yard strike to Ke’Shawn Williams.

Army matched the Demon Deacons on the scoreboard in the first half until Christian Beal-Smith scored on a 13-yard run up the gut of the Army defense with 35 seconds left in the second quarter to give Wake Forest a 28-21 halftime lead.

Hartman guided the Demon Deacons to two quick scores in the first quarter, hitting Perry for 50 yards down the middle and three plays later connecting with Roberson for a 41-yard score and a 14-7 lead.

After Buchanan’s 3-yard scoring run knotted the score at 14-all early in the second quarter, Hartman connected on a 54-yard scoring pass to Perry, who was free and clear after Army defender Cam Jones fell.

Army tied it at 21-21 on Tyhier Tyler’s 24-yard run up the middle with 3:17 left in the second. Army had failed on a fourth-and-2 play, but after a video review by the officiating crew, Wake Forest was penalized for having too many players and Tyler took advantage.

Hartman broke the Michie Stadium record for passing yards set in 2014 by Buffalo’s Joe Licata, who threw for 401 yards in Monken’s first game as Army coach. The Black Knights won that one, 47-39.

Wake Forest: With Hartman at the controls, the Demon Deacons are a force, but the defense didn’t measure up against Army and they face a huge test in November in the race for the Atlantic Division title in the Atlantic Coast Conference with consecutive games at North Carolina, home against NC State and at Clemson.

Army: The Black Knights have demonstrated that they can play with the best programs in the country. They rushed for a season high and threw for three touchdowns, a good sign going forward.

Army has a break before it faces a Commander-in-Chief’s Trophy matchup against service academy rival Air Force on Nov. 6 at Globe Life Field in Arlington, Texas. It’s the first neutral-site game in the series since 1965 at Soldier Field in Chicago.