EAST LANSING, Mich. (AP) — No. 5 Michigan State has a lot of momentum following its thrilling comeback win over its in-state rival, giving one of college football’s surprising teams a shot to win a Big Ten Conference title and perhaps contend for a national championship.

“That was an epic game, that was a classic,” said Mel Tucker, who became the first Michigan State coach in the 114 years of the rivalry to beat Michigan in his first two meetings. “I mean, that was a big-time game. It was an honor and a privilege to be a part of something like that.

“This was a game we had to have. We were able to get it done.”

With the victory, Michigan State stayed atop the Big Ten East standings along with No. 6 Ohio State, which beat Penn State 33-24 Saturday, and jumped three spots from No. 8. Michigan dropped to No. 9.

For the first time since 2015, the Spartans, who last year finished with a 2-5 record, enter November with hopes of winning the division and playing in the Big Ten championship game and earning a possible College Football Playoff berth.

Michigan State has not won its first nine games since 1966, when it finished No. 2 in the AP rankings with the same 9-0-1 record as national champion Notre Dame.

“I’ve said this before publicly: Our goal is to win every game on our schedule,” Tucker said. “Whether it’s home or away, or regardless of who it is, that’s our goal.

“Now whether we can do that or not, only time will tell. So what does success look like? I’ve been asked several times, success is us reaching our highest potential as a football team, and we have not yet.”

One player that appears to be showcasing his potential is Walker, who totaled 197 yards, pushing his season total to 1,194. He is the first Spartan to rush for more than 1,000 yards since Jeremy Langford ran for 1,522 in 2014. According to STATS, his five touchdowns were the most against an AP top-10 team since Nov. 23, 2001, when Colorado’s Chris Brown had six rushing touchdowns vs. Nebraska.

“I think actions speak louder than words,” said Reed, who had six receptions for 80 yards against the Wolverines. “You see out there on the field. He’s the best running back in the nation in my opinion. He does it week in and week out.”

Michigan State’s Big Ten and playoff hopes will be determined with road games at Purdue and Ohio State and home matchups with Maryland and Penn State.

Walker and the Spartans hope to continue the momentum Saturday when they visit Purdue (5-3, 3-2). They will try to avoid history repeating itself against the Boilermakers. In 1999, then fifth-ranked Michigan State visited Purdue following a win over Michigan and was upset 52-28.

“We have a tough schedule ahead,” Tucker said. “Next week, against a very strong team (at Purdue). And you know, it’s tough sledding. We need to be playing the best football in November, if you want to get anything done in terms of what you’re talking about.” 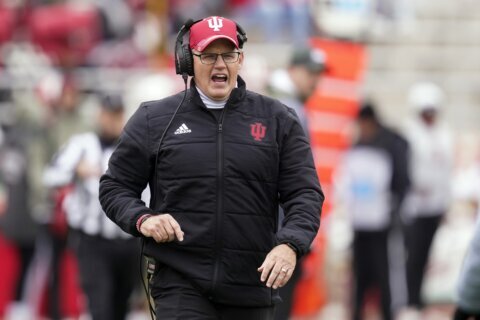