BUFFALO, N.Y. (AP) — Matt McDonald threw for 263 yards and a career-best four touchdowns — three in the first half — ran 47 yards for the capper with under a minute to play and Bowling Green survived the ejection of head coach Scot Loeffler to upend Buffalo 56-44 on Saturday.

McDonald entered the game with six touchdown passes on the season.

The teams combined for 49 points in the fourth quarter alone, matching score for score, and Buffalo rallied with 34 points after halftime. The teams amassed 983 yards of total offense.

The Falcons (3-6, 1-4 Mid-American Conference) ended a four-game skid. McDonald’s run for the final touchdown appeared to be set up as a kneel-down when he saw a gap and bolted out of the pocket.

McDonald completed eight of his first 11 passes with two touchdowns to Christian Sims, for 81 and 6 yards — and a third to Tyrone Broden. Broden had two TD catches and 110 yards receiving while Sims made five catches for 103 yards.

Loeffler was ejected in the third quarter after being flagged for two unsportsmanlike conduct calls on back-to-back drives. He became the first head coach ejected since a rules change in 2016. In 18 minutes after his ejection, Bowling Green scored more points than in any full game over the last two seasons.

Buffalo backup quarterback Matt Myers was 12-of-24 passing for 239 yards with a touchdown pass, and he ran for two more after starter Kyle Vantrease left after a sack.

The Bulls (4-5, 2-3) got to McDonald for three sacks after notching a program-best 11 sacks a week earlier. 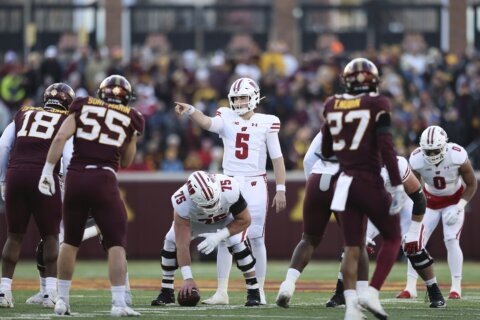 Minnesota chops down No. 18 Wisconsin 23-13 to take back Axe 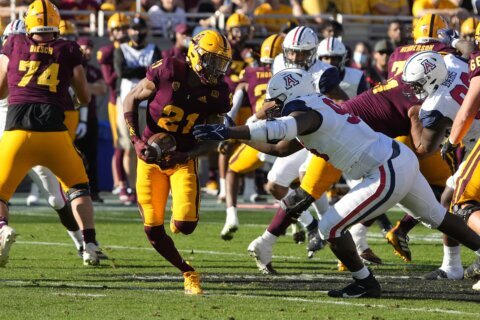