EVANSTON, Ill. (AP) — Mar’Keise Irving ran for two touchdowns and a career-high 110 yards and Justin Walley scooped up a fumble and ran 25 yards for a score as Minnesota defeated Northwestern 41-14 Saturday.

Already thin at running back with season-ending injuries to Mohamed Ibrahim and Trey Potts, Minnesota’s Bryce Williams suffered a lower leg injury, putting pressure on Irving, a freshman, and Thomas, a redshirt freshman.

Williams’ status is unknown as he undergoes tests.

“Everybody knows we’re going to run the football. I don’t think that is a secret. I don’t think we’re catching anyone off guard by that,” Minnesota coach P.J. Fleck said.

Thomas was banged up early in the game but returned. The Gophers’ depth chart has taken so much of a hit that Fleck experimented with linebacker Derik LeCaptain at running back. LeCaptain had a 24-yard run for a touchdown in the fourth quarter.

“Bryce went down today, Ky was done for a while and we were down to Bucko (Irving) and we had Derik (LeCaptain) on deck. Again, those are the cards we’re dealt,” Fleck said.

Before it could get its offense untracked Northwestern coach Pat Fitzgerald pulled starter Ryan Hilinski. Andrew Marty finished 10 of 16 for the Wildcats (3-5, 1-4) and threw a pair of touchdown passes.

Fitzgerald would not name a starter going forward.

“We have to help him (Marty) a little bit more, we had more drops in the second half than we had in a long time and those are opportunities for first downs and being able to sustain drives,” Fitzgerald said. “I thought he gave us a spark and that was encouraging. So who is going to be our quarterback for next week? We will work through that.”

The Gophers never trailed after opening the game with a 13-play, 67-yard drive capped by a 26-yard field goal by Matthew Trickett.

On the next play from scrimmage, Hilinski completed a pass to Malik Washington, who was stripped by Mariano Sori-Marin and Walley picked up the loose ball and scored.

Minnesota held Northwestern to a three-and-out and capitalized with another field goal from Trickett for a 13-0 first-quarter lead.

Marty came in during an 11-play 75-yard drive and capped it with a 6-yard touchdown pass to Evan Hull, who accounted for 50 yards of total offense on the drive.

The Gophers answered on their next possession with Irving scoring from the 3.

Trailing 20-7 late in the first half, Northwestern got a key defensive stop when Coco Azema tipped a Morgan pass and Brandon Joseph made a diving catch in the end zone for the interception.

Morgan had an 18-yard touchdown run early in the fourth quarter.

Minnesota: With an impressive win against Northwestern, Minnesota sits alone at the top of the Big Ten West standings despite losing its two top running backs.

Northwestern: Fitzgerald will need to find stability at quarterback for Northwestern to compete the rest of the way. Fitzgerald started the season with Hunter Johnson, replaced him with Hilinski, and now has Marty as a potential starter.

IMPRESSED WITH THE FRESHMEN

Irving and Thomas ran for a combined 216 yards. That got center John Michael Schmitz’s attention.“Those young backs are special,” he said.

Marty wasn’t sure if he was going to stay in the game after the touchdown pass to Hull. “I wasn’t expecting really anything,” said Marty. “Whenever my name’s called I’ve been ready to go. I was on a roll and I wanted to go back in and it eventually happened.” 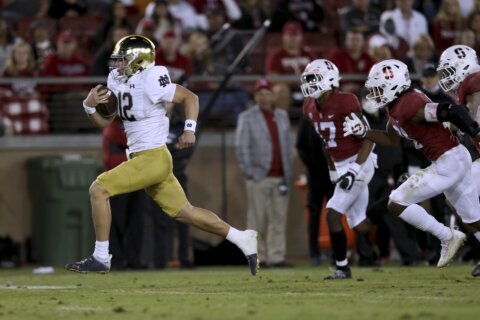 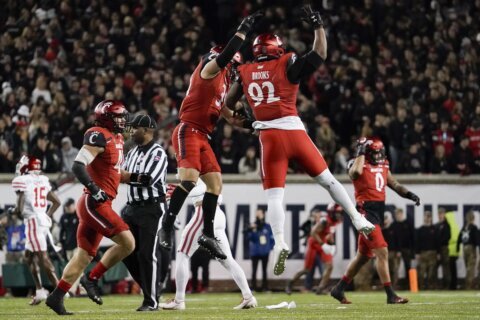 Bearcats vs Tide: Cotton Bowl CFP semifinal at a glance 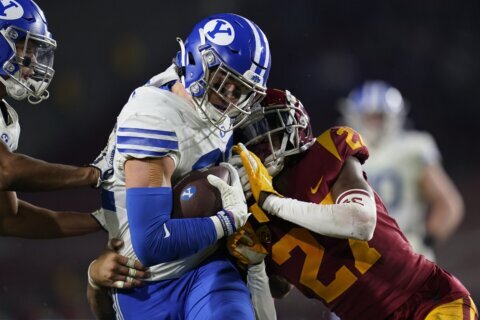