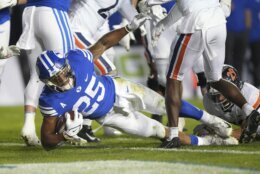 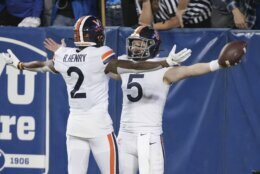 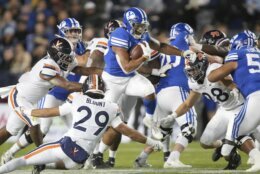 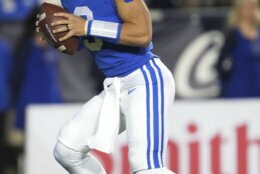 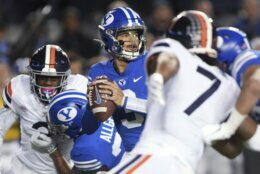 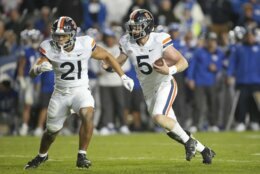 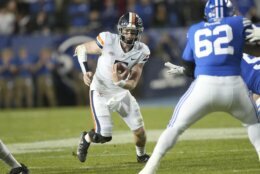 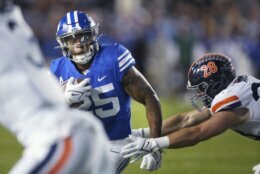 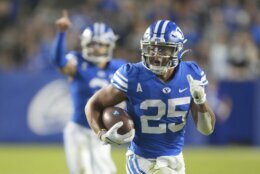 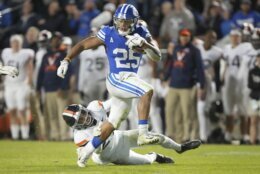 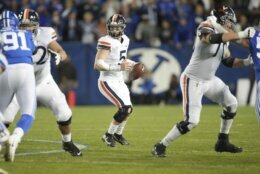 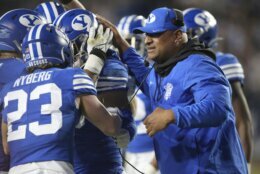 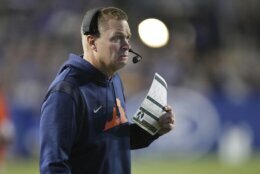 PROVO, Utah (AP) — Winning with tough defense has been BYU’s path to success this season. The 25th-ranked Cougars proved they still know how to light up a scoreboard.

BYU outlasted Virginia 66-49 on Saturday night in a game in which the teams combined for 1,322 yards and 115 points. The Cougars got career-best performances from Tyler Allgeier and Jaren Hall to secure their fifth victory over a Power 5 opponent this season.

“Defensive coaches don’t really like this game, but it felt like an old-school BYU type of game,” Cougars coach Kalani Sitake said.

BYU (7-2) pulled away after scoring 21 points off three turnovers.

Virginia kept pace behind a strong all-around performance from Brennan Armstrong. He threw for 337 yards and four touchdowns, and also tossed a pair of interceptions. Armstrong added 94 yards and two TDs on 11 carries. He left late in the fourth quarter after sustaining an apparent rib injury.

The Cougars were mired in a shootout with Virginia until forcing back-to-back turnovers in the fourth quarter.

After BYU took a 52-49 lead on Hall’s 10-yard pass to Neil Pau’u, Uriah Leiataua forced and recovered a fumble at the Virginia 31. Allgeier scored on a 31-yard run two plays later. Then, Drew Jensen picked off a pass from Armstrong at the BYU 35 and the Cougars cashed in with a 4-yard run by Allgeier that increased the lead to 66-49 with 7:12 left.

BYU could not have scripted a better start. The Cougars scored touchdowns on their first four drives and forced a turnover to bury Virginia in a major hole only a few minutes into the game.

Hall threw a 52-yard pass to Samson Nacua on BYU’s first play and scored on a 2-yard run three plays later. The Cougars extended their lead on a 1-yard plunge by Allgeier, set up by Payton Wilgar picking off a pass from Armstrong and returning it to the Virginia 11. BYU extended its lead to 21-0 midway through the first quarter after Hall connected with Puka Nacua on a fade route for a 26-yard touchdown pass.

The Cavaliers finally got on the board when Armstrong scored on 5-yard run late in the first quarter. BYU answered with a 4-yard run by Allgeier to extend their lead to 28-7 less than a minute into the second quarter.

“It just felt like everything was flowing,” Hall said.

Virginia rallied before halftime behind a series of big plays. The Cavaliers scored touchdowns on six straight drives – including all five second-quarter drives.

Armstrong threw a 40-yard pass to Jelani Woods and a 70-yard pass to Dontayvion Wicks to cut BYU’s lead to seven. Then, Devin Darrington scored on a 49-yard run and Armstrong followed with a score on a 30-yard run that gave Virginia its first lead at 35-31.

The Cougars regained a 38-35 lead on a 40-yard catch by Samson Nacua. But Virginia went back in front 42-38 on a 12-yard catch by Billy Kemp just before halftime.

“We had expected that of BYU,” Mendenhall said. “They start fast against a lot of different teams. They jumped out on us quickly, but our team remained poised and composed. Our offense responded and we went in with a lead at half time. That’s tough to do.”

Virginia: It took a quarter for the Cavaliers to get going, but when they did, they torched BYU with numerous big plays before halftime. Virginia piled up 367 yards while scoring touchdowns on all five second-quarter drives. The Cavaliers averaged 20.4 yards per play during the quarter.

BYU: The Cougars totaled 226 yards and averaged 10.8 yards per play in the first quarter. It did not supply enough of a cushion amid a defensive collapse during the second quarter. But BYU’s offense never slowed down in the second half.

Mendenhall returned to LaVell Edwards Stadium for the first time since leaving to become Virginia’s head coach following the 2015 season. He spent 13 years in Provo – the last 11 as BYU’s head coach. Mendenhall compiled a 99-43 record with the Cougars. He led BYU to 11 bowl games and back-to-back Mountain West Conference titles in 2006 and 2007.

“It was a unique experience to have spent 13 years at one place and then come back,” Mendenhall said. “I’m grateful to have been the coach here.”

BYU earned its 600th win since officially starting its football program in 1922. The Cougars have claimed 427 of those victories since LaVell Edwards took over the program in 1972.

Puka Nacua and Samson Nacua became the first brothers at BYU to record 100 receiving yards in the same game. Both Nacuas finished with 107 receiving yards and a touchdown to lead the Cougars. Puka hauled in eight receptions and Samson grabbed three.

Armstrong set a Virginia record for single-season passing yardage. He has totaled 3,557 passing yards in nine games this season, passing Bryce Perkins, who threw for 3,538 yards in 2019. Armstrong has thrown for 300 or more yards eight times in nine games.

BYU should move up a few spots in the AP Top 25 Poll after beating a fifth P5 opponent.

Oklahoma picks up pieces after Lincoln Riley leaves for USC