MORGANTOWN, W.Va. (AP) — West Virginia’s comfortable lead evaporated, the sellout crowd’s cheers had turned to boos and possession of the Black Diamond Trophy came down to a goal-line stand.

Braxton Burmeister nearly brought No. 15 Virginia Tech back from a 20-point deficit, but his fourth-down pass fell incomplete at the goal line in the final minute, handing the Mountaineers a 27-21 victory Saturday.

West Virginia safety Alonzo Addae said there was no sense of desperation on the defense when Virginia Tech was handed a golden opportunity to win.

“At the end of the day, we want the game to be on the line and it be on us,” Addae said. “We pride ourselves on playing great defense here, so it was just another opportunity to make a stand and bring home the win.”

Jarret Doege threw two touchdown passes and Leddie Brown rushed for 161 yards and a score for the Mountaineers (2-1), who had built a 27-7-point lead midway through the third quarter before falling flat.

“Winning is hard and we talked about it before the game,” coach Neal Brown said. “I thought this was going to be a defining moment for us, for this team and where we’re at.

Burmeister threw for two scores, including a 29-yard TD toss to Jalen Holston with 3:10 left. Virginia Tech got the ball back with 2:11 remaining on Jermaine Waller’s interception of Doege at the West Virginia 17, but Burmeister threw incomplete into a crowd of players on fourth-and-goal from the 3 and the Mountaineers ran out the clock.

It was one of three Virginia Tech drives that stalled inside the West Virginia 10, with the Hokies coming away with no points.

“Our guys came back in the second half and really just kept fighting and scratching and clawing, and ultimately gave us the chance to win the game there,” Virginia Tech coach Justin Fuente said. “Our guys are pretty crushed. We’re all crushed.”

“I thought we called the right plays,” he said. “You make mistakes, you can’t execute, it goes against you.”

The Hokies (2-1) had allowed only three touchdowns in their first two games but gave up two quick scores to the Mountaineers.

West Virginia doesn’t have a reputation for fast drives but jumped ahead 14-0 less than 6 minutes into the game.

Leddie Brown, who had five touchdowns entering the game but had been limited to 104 rushing yards, went 80 yards up the middle for a score on West Virginia’s second play from scrimmage.

The Mountaineers needed only three plays on their next drive, which was helped by a hands-to-the-face call on Virginia Tech linebacker Keshon Artis. On the next play, Doege found Bryce Ford-Wheaton in the end zone into double coverage from 29 yards out.

Virginia Tech: In their first road game, the Hokies were staring at a double-digit deficit before the sellout crowd had settled in its seats and couldn’t capitalize on the many opportunities they had to score.

West Virginia: Despite a second-half fade, the Mountaineers took back the Black Diamond Trophy for the first time since 2003. The trophy between the former Big East rivals was introduced in 1997 and is a nod to the region’s rich history with coal.

Virginia Tech will take a tumble when The Associated Press poll comes out Sunday.

West Virginia opens Big 12 play at No. 3 Oklahoma next Saturday. The Mountaineers have never beaten the Sooners since entering the league in 2012. Last year’s game was canceled due to the coronavirus pandemic. 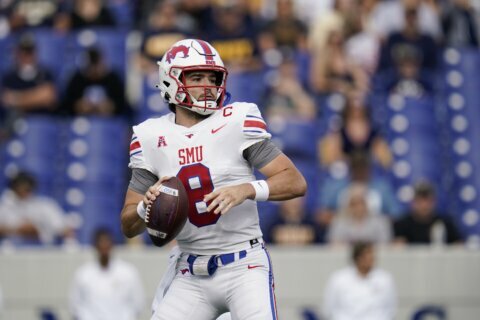 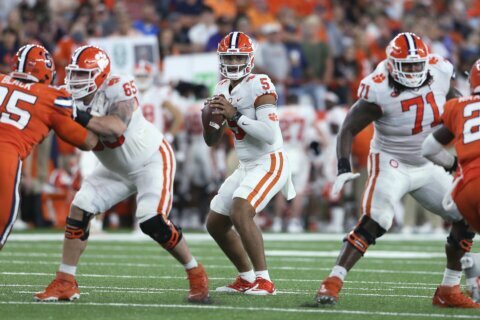