The Broncos (1-1) rebounded from an opening weekend thrashing at Michigan of the Big Ten Conference, amassing 407 yards of total offense against Illinois State and holding the Redbirds (1-1) to just 57.

The Broncos were driving, up 28-0 with 5:30 left in the game when the stadium lights went out, causing a brief delay.

Western Michigan quickly doused Illinois State’s hopes for an upset, driving 75 yards on a game-opening drive that consumed 5:22 and ended with a Jefferson run from the 1. The Redbirds, an FCS school, had defeated FBS opponents in their last two matchups.

Saturday, their first five possessions ended with four punts and an interception. Illinois State was 1 for 13 on third down conversions with a total of four first downs.

Bryce Jefferson passed for 29 yards with an interception and 10 Redbirds gained 28 on the ground.

Corvin Moment led the Broncos defense with six tackles — all unassisted including a sack and three tackles for loss. Kaleb Eleby was 15-for-21 passing for 174 yards and a TD. Eleby entered the game with the top passer rating (195.1) among returning FBS quarterbacks. 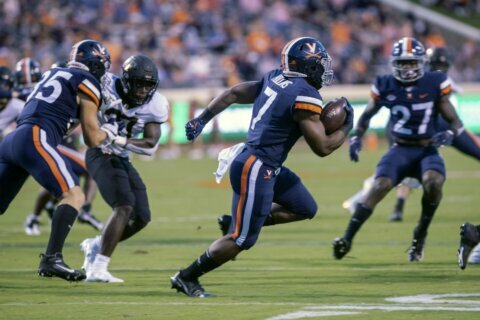