Southern California is wounded. It’s smarting after losing at home to Stanford, watching any College Football Playoff hopes evaporate, and finally dismissing Clay Helton as head coach after years of conjecture about his job security.

The tonic for the Trojans could be a trip to the Palouse and a matchup with Washington State that traditionally has gone in USC’s favor.

“Everybody has embraced the opportunity that we have set for us,” said USC interim coach Donte Williams, who became the team’s first Black head coach when he stepped in for the fired Helton. “The biggest thing is about going 1-0 today.”

Last Saturday’s dispiriting 42-28 loss at home to Stanford was the final straw for Helton, who was let go two days later. Williams, who was USC’s cornerbacks coach, will lead the team for the remainder of the season.

Williams is focused on correcting the mistakes that cost USC in the loss to Stanford, many of which were self-inflicted.

“This is the nature of college sport,” USC captain and punter Ben Griffiths said of Helton’s firing. “We understand that. As players, we’ve got a job to do and that’s finish off this season and that starts this week in our preparation and really locking in against a tough Washington State side.”

The Trojans (1-1, 0-1 Pac-12) never led against Stanford and suffered their worst home loss to an unranked opponent in 21 years. But they remain dangerous. Their offense is led by quarterback Kedon Slovis, though he has yet to match some of the big numbers he posted a year ago. Slovis was 27 of 42 for 223 yards, one touchdown and one interception in the loss to Stanford.

Last year, Slovis had one of the best games of his career against Washington State in a 38-13 win. Slovis threw for nearly as many touchdowns (five) as incompletions (seven) against the Cougars.

This year, Slovis will face a Washington State secondary that has been slowed by injuries, meaning it could be a big day for Drake London and the Trojans’ deep group of pass catchers.

Washington State (1-1) will play its third consecutive home game to begin its season. The Cougars lost to Utah State in their opener then pounded FCS Portland State last Saturday.

The Cougars’ offense looked particularly good against the Vikings, and the team appears to have settled on Jayden de Laura as its starting quarterback. De Laura threw for three touchdowns and ran for another against Portland State in the 44-24 win.

USC holds a 60-10-4 advantage in the series with Washington State, but is just 3-2 in matchups since 2013. The Trojans’ last visit to Pullman was also rather forgettable. Ranked No. 5, USC lost to then-No. 16 Washington State 30-27 in 2017. It was the Cougars’ first win over a top-five opponent in 25 years and was clinched when Jahad Woods — who will be on the field Saturday for Washington State — forced a fumble by Sam Darnold that was recovered by the Cougars in the closing seconds.

USC would like to see a spark from an offense that has been underwhelming so far this season under offensive coordinator Graham Harrell, who coached receivers at Washington State from 2014-15 under Mike Leach. The Trojans had just two offensive touchdowns in the opener against San Jose State and last week trailed 42-13 before two late TDs made the final score more respectable.

“When you move the ball, you got to finish and that’s the key,” Harrell said. “It doesn’t matter if it’s the drive, the play, the game, whatever it is.”

Washington State coach Nick Rolovich was grilled by reporters Monday about his initial decision not to get vaccinated for COVID-19. He has since said he is going to follow Washington Gov. Jay Inslee’s mandate that employees of the state’s colleges must be vaccinated or have an approved religious or medical exemption by Oct. 18.

“I still plan on, like what I said, following the mandate and doing what I need to do to be the coach here. That’s all I can say about that,” Rolovich said. 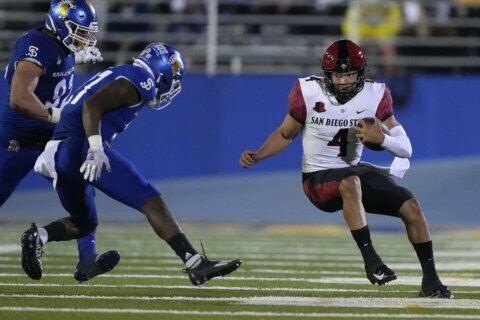 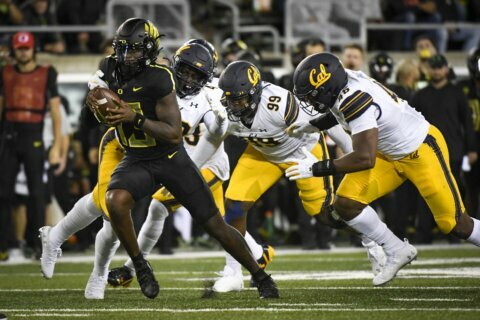