ORLANDO, Fla. (AP) — Isaiah Bowser rushed 172 yards, including the go-ahead touchdown with a little over four minutes remaining, and UCF rallied from a 21-point deficit to beat Boise State 36-31 on Thursday night in a game that began almost three hours late because of lightning-caused delays.

The Knights and Broncos were scheduled to start their game at 7:05 p.m., but multiple lightning strikes that appeared within an 8-mile radius resulted in a 9:45 p.m. kickoff.

“I think we learned that no matter what adversity we come through, we can come back, fight back, and win,” Bowser said.

Boise State stormed out to a 21-0 lead before UCF cut the margin to 24-14 by halftime and scored two touchdowns in the third quarter to take its first lead.

After throwing a 100-yard pick-6 to Tyric LeBeauf — the longest in Boise State history — in the first quarter, Dillon Gabriel led scoring drives to end and begin the half. He threw for four 318 yards and four touchdowns, while being picked off twice by LeBeauf. Jaylon Robinson made six catches for 140 yards and a score for UCF.

Although he wasn’t perfect and the odds were stacked against them, Gabriel still maintained his confidence in his team to come back.

“You got to realize you’re down 21-0,” Gabriel said.“I remember after throwing that pick, Coach Gus said, ‘We’re going to win this thing.’ And that just gave me confidence and it circled around. Just that belief that we built has been really showing.”

UCF amassed 181 yards in the third quarter while its defense held Boise State to negative yardage and seven quarterback hurries. The Knights finished with 573 yards offense to 302 for the Broncos, who had only 20 yards rushing.

Bachmeier ran the Broncos’ offense proficiently in the first half, throwing for 172 yards and a touchdown. He finished with 263 yards passing, two scores and an interception. His 7-yard score to Khalil Shakir gave Boise State a 31-30 lead with eight minutes remaining.

The game marked the debut of new head coaches for both teams, Malzahn, and Boise State’s Andy Avalos.

With 4:16 remaining in the fourth, Gabriel scrambled left for the pylon and was hit out of bounds, causing him to be down for several moments. He re-entered the game.

Boise State: Last season, the Broncos ranked No. 2 in the FBS on third-down conversion defense and in the first half against the Knights they held UCF to 1 of 6. But in the second half, UCF was 8 of 11.

UCF: Against the Broncos, the Knights committed five penalties for 35 yards in the first half alone. Last season, UCF surrendered the second-most penalties in college football. They turned that around in the second half with just 15 penalty yards. 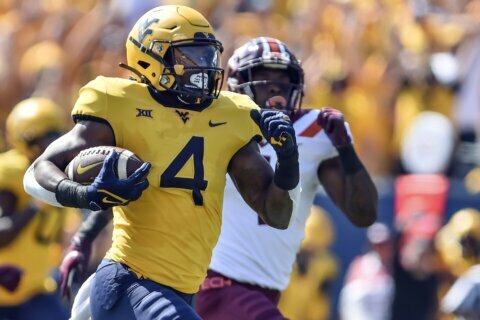 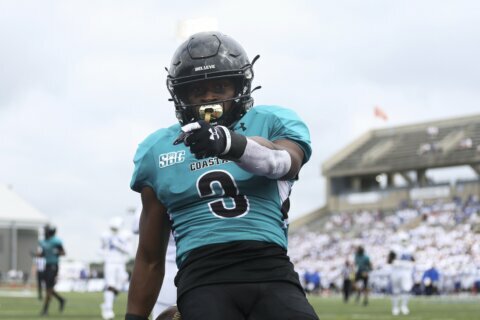 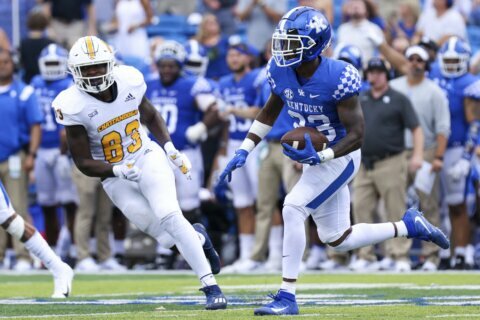