Coronavirus News: Fairfax Co. votes to increase substitute teacher pay | Is it time to get a COVID-19 booster? Which one? | Local cases of COVID-19 | How many in DC region are vaccinated?
Home » College Football » O'Connell rallies Boilermakers late…

O’Connell rallies Boilermakers late to get past Illini 13-9

He may have saved their bowl hopes.

After relieving Jack Plummer in the third quarter and throwing interceptions on his first two series, the fifth-year senior capped a 94-yard scoring march drive with a 14-yard scoring toss to T.J. Sheffield for the game’s only touchdown and a 13-9 victory over Illinois.

“We just felt like because we became one-dimensional, we think Aidan is our most accurate thrower and that’s not a knock on Jack,” Purdue coach Jeff Brohm said. “He stands in there. he’s poised, he played to the end and he helped us find a way to win.”

It sure wasn’t easy under the circumstances.

The Boilermakers (3-1, 1-0 Big Ten) started the day without their best receiver, their top two running backs and lost starting tight end Payne Durham in the first half after a jarring hit knocked his helmet loose.

After leading Purdue to field goals on its first two series, Plummer couldn’t muster another score, so Brohm changed quarterbacks and O’Connell made the game-turning play for the touchdown with 5:44 left in the game.

Purdue’s defense clinched the victory by forcing a turnover on downs in its own red zone.

Illinois (1-4, 1-2) has lost four straight since a season-opening win over Nebraska.

But it was coach Bret Bielema’s decision to punt on fourth-and-2 from the Boilermakers’ 34-yard line that drew questions, especially after Jeff McCort made three field goals including the tie-breaker to give Illinois a 9-6 lead early in the fourth quarter.

“I’m trying to win a game, not lose a game and I know that sounds silly because we just lost it,” Bielema said after making a similar decision for the second straight week and losing both. “But it’s the decision I’d make 100 times over to go for it —ball on the 5, the defense has been playing that way the whole way. I’d do it 100 times over.”

Illinois: Bielema built his reputation on a powerful ground game. In his first season at Illinois, he’s clearly trying to follow a similar script. Saturday’s strong ground game helped Illinois play keep away but it didn’t result in a victory.

Purdue: Without David Bell (concussion) and their top two running backs, the Boilermakers’ offense was depleted of playmakers and it showed. Defensively, they were tough and fast. But without more scoring punch, Purdue will struggle to win many more games.

Illinois: After running back Chase Brown and cornerback defensive back Devon Witherspoon started the game on the bench, the Illini scratched their top defensive player, linebacker Jake Hansen, following warmups. All three have undisclosed injuries. The Illini also nearly lost starting safety Sidney Brown 5:02 into the game on a targeting call but the penalty was overturned by a replay review.

Illinois: Josh McCray had 24 carries for 156 yards and his first career 100-yard game in his first start. … Brandon Peters was 14 of 26 with 100 yards and one fumble. … Converted receiver Isaiah Williams led the Illini with four receptions for 21 yards. … Illinois fell to 45-46-6 in the all-time series with Purdue.

Purdue: Plummer was 12 of 21 with 95 yards before he was pulled in the third quarter. O’Connell was 12 of 19 with 182 yards. … The Boilermakers gained 1.5 yards per carry. … Milton Wright caught seven passes for 88 yards, Sheffield had four receptions for 44 yards and Abdur-Rahmaan Yasseen had three catches for 77 yards — his first catches this season. 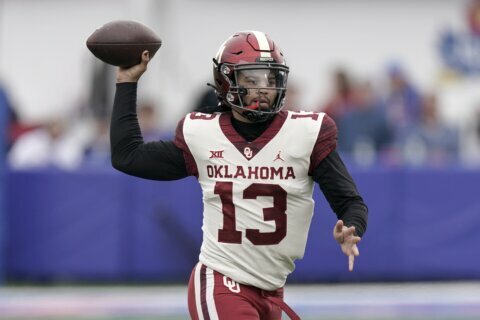