CORAL GABLES, Fla. (AP) — Miami quarterback D’Eriq King has a shoulder injury that will need further evaluation this week, the latest blow to the reeling Hurricanes.

King will meet with doctors again on Tuesday, coach Manny Diaz said. The Hurricanes, who fell out of the AP Top 25 on Sunday for the first time this season, play lower-division Central Connecticut State on Saturday before opening Atlantic Coast Conference play against Virginia on Sept. 30.

King was injured during Miami’s 38-17 loss to Michigan State this past Saturday. King broke the Hurricanes’ single-game records for completions and attempts in that game, connecting on 38 of his 59 throws for 388 yards, two touchdowns and two interceptions.

“I’m all right,” King insisted after the game.

He left the field briefly in the second half of that game so the shoulder could be evaluated, then returned without missing a single Miami snap. King was shaken up later in that game on at least two other occasions and again remained in the contest.

“The guy does everything for this program,” Diaz said. “The guy simply sacrifices himself to help us … we’ve got to get more of that around him. I think there’s too many guys that are sitting there watching D’Eriq and not playing with the same desperation that he has. I think that’s been unfair to D’Eriq.”

If King — who is tied for fifth nationally with 27 completions per game so far this season — is sidelined, Miami will choose between returning freshman Tyler Van Dyke or true freshman Jake Garcia to take over at quarterback. Van Dyke has thrown three passes in very limited action for Miami over the past two seasons, while Garcia has yet to make his collegiate debut.

“We’ve prepared them both every week as if they’re both the backup,” Diaz said.

Miami is also awaiting results of further tests on offensive lineman Jalen Rivers, who left during the Michigan State game with a knee injury.

“They did initial scans and it shows he’s got something,” Diaz said. “But we won’t know the initial length of time until Tuesday.”

The Hurricanes opened the season ranked No. 14 in the AP poll. They dropped to No. 22 after a season-opening loss to Alabama, dropped two more spots after narrowly defeating Appalachian State and then fell out entirely following the 21-point home loss to Michigan State.

Miami had been in the AP rankings for 19 consecutive weeks, which was the eighth-longest active streak in the country before Sunday’s poll was released.

“We deserve the expectations because this is the University of Miami and this is why we come here, why we play here and why we coach here,” Diaz said. “We accept that coming into this. And the three performances have been below expectations. That’s fair. … Our performances are hurting all of us.”

Brock Berlin held the Miami record for completions in a game for nearly 18 years; he had 37 against West Virginia on Oct. 2, 2003. Berlin and Ryan Collins shared the record for pass attempts in a game with 54; Berlin’s came in that 2003 game against the Mountaineers and Collins had that many against Memphis on Nov. 27, 1993.

Central Connecticut State (1-2) is coming off a 56-10 loss to Southeastern Louisiana this past weekend. The Blue Devils last played a Power 5 team in 2017, falling to Syracuse 50-7 that season. 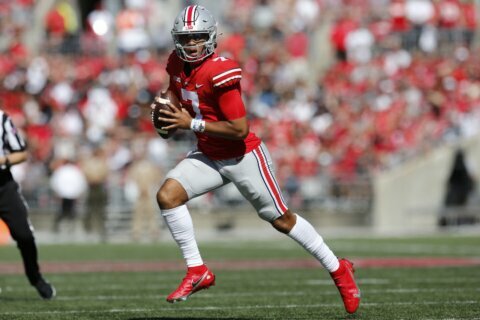 Hoosiers try to snap losing streak against No. 5 Buckeyes 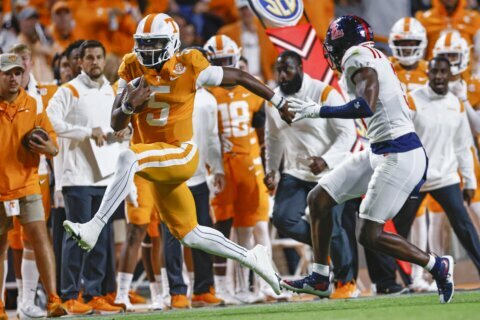 No. 4 Alabama seeks to extend streak against rival Tennessee 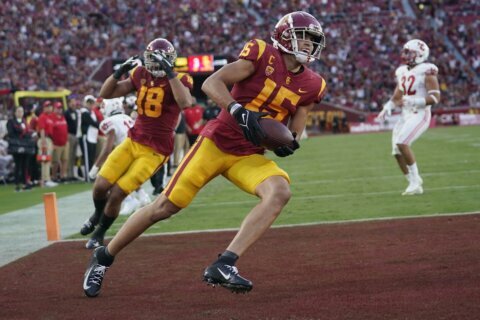 Records meaningless whenever No. 13 Irish and Trojans meet