Coronavirus News: Fairfax Co. votes to increase substitute teacher pay | Is it time to get a COVID-19 booster? Which one? | Local cases of COVID-19 | How many in DC region are vaccinated?
Home » College Football » Mayhem at Mercedes: Ga…

ATLANTA (AP) — Georgia Tech is taking the shortest of road trips for a home game that coach Geoff Collins hopes will provide a boost to recruiting.

A victory would help, too.

In Collins’ third season, the Yellow Jackets (1-2, 0-1 Atlantic Coast Conference) are still seeking the sort of signature win that would signal a true turnaround. They hope to get it Saturday night when they host No. 21 North Carolina at Mercedes-Benz Stadium.

The 71,000-seat, retractable-roof stadium is best known as the home of the NFL’s Atlanta Falcons. Located about a mile from Georgia Tech’s midtown campus, this is the first of six games in six years the Jackets will play at their new home away from home.

“Every guy that we’re going to end up signing in this class and the next class, every single year will play a game in Mercedes-Benz Stadium,” Collins said, already giving his sales pitch. “I’m excited that our guys get to experience that.”

Starting out the season in the Top 10, North Carolina (2-1, 1-1) managed just 10 points while giving up six sacks in an ugly loss at Virginia Tech. For star quarterback Sam Howell, it was the first three-interception game of his career.

But the Tar Heels looked more like the team everyone expected in winning a 59-39 shootout over Virginia last week. They piled up 699 total yards and scored touchdowns on all five of their second-half possessions.

North Carolina coach Mack Brown said it took time to build chemistry as injuries along the offensive line made it even more challenging to replace a pair of 1,000-yard rushers (Javonte Williams and Michael Carter) and a 1,000-yard receiver (Dyami Brown).

He said there’s no chance his team will look past the Yellow Jackets after they nearly pulled off a major upset at Clemson last week, losing 14-8 in a game that went down the final seconds.

“Georgia Tech did us a favor,” Brown said. “Our guys understand Clemson. They know how good their players are … so that ought to wake them up if nothing else.”

Some other things to watch for when Georgia Tech faces North Carolina:

Jeff Sims, who showed dynamic potential as a freshman last season, was injured in Georgia Tech’s opening game and hasn’t played since.

Jordan Yates started the last two weeks, guiding the Yellow Jackets to an easy win over FCS school Kennesaw State before the close call at Clemson. He has completed 65.3 percent of his passes for 592 yards, with five touchdowns and just one interception.

Sims is apparently healthy, but Georgia Tech hasn’t said who will start against the Tar Heels.

“I’m really happy with both of them,” offensive coordinator Dave Patenaude said. “We’re fortunate that we can put either one of them out there.”

Howell has turned in the first two 100-yard rushing performances of his career the past two weeks (102 against Georgia State, 112 against Virginia) while continuing his prolific passing.

Howell is only the fourth Bowl Subdivision quarterback to have consecutive games with 300 yards passing and 100 yards rushing, with the most notable player on that list being Heisman Trophy winner Lamar Jackson of Louisville in 2017.

“I kind of got lucky there that I had back-to-back games,” Howell said. “It’s certainly not something I do every week.”

Josh Downs has been great from the start for the Tar Heels, while Tennessee graduate transfer Ty Chandler stepped up to lead a strong rushing attack against the Cavaliers.

Downs had eight catches in each of UNC’s first three games, including a 203-yard, two-TD showing last week.

After throwing five TD passes against Virginia, Howell will face a Georgia Tech defense that leads the ACC and ranks fifth in the Football Bowl Subdivision in passing yards allowed (124.3 per game).

The Yellow Jackets are coming off a stellar defensive performance in a 14-8 loss at Clemson, limiting the Tigers to 284 yards in total offense.

Georgia Tech has plenty of depth at running back, which sometimes presents a challenge to get everyone enough touches.

Jahmyr Gibbs leads the way with 185 yards rushing, but Jordan Mason (127) and Dontae Smith (121) have also made big contributions.

“”That’s a really good problem to have,” Patenaude said. 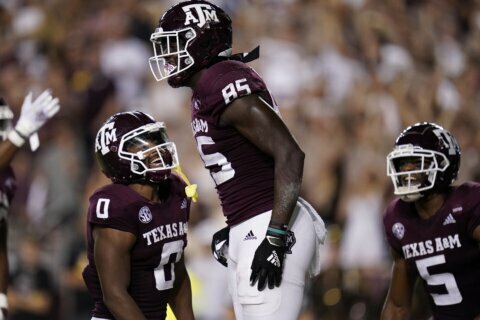 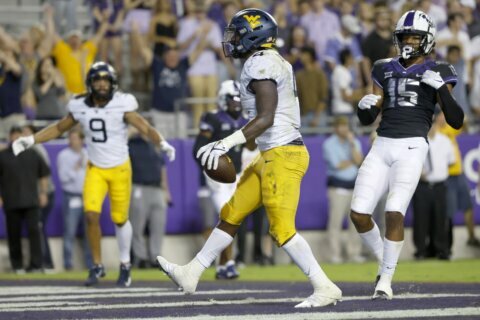