LEXINGTON, Ky. (AP) — Will Levis came to Kentucky expecting this kind of performance, though his first time out created a tough act to follow.

Levis threw for career highs of 367 yards and four touchdowns in his Wildcats debut, including two to fellow transfer Wan’Dale Robinson, and Kentucky overcame an early hole to blow out Louisiana Monroe 45-10 in Saturday’s season opener.

Playing on a sunny afternoon before its biggest crowd (in nearly two years following a season of COVID-19-related attendance restrictions, the Wildcats shrugged off a 7-0 deficit after a turnover to overwhelm the rebuilding Warhawks. Unveiling a new pro set offense with former Penn State quarterback Levis behind center, Kentucky piled up 341 of its 564 yards by halftime alone to lead 28-7 and only allowed the Warhawks past midfield twice besides after the giveaway.

Levis hit Robinson, a Kentucky native and Nebraska transfer, with TD passes of 33 and 15 yards around a one-play, 58-yard scoring pass to Ali. He hit Brenden Bates with a 4-yard TD early in the fourth quarter to finish 18 of 26 passing, exceeding previous highs for completions along with yardage and total offense in 15 games with the Nittany Lions.

Levis still has work ahead on touch and timing, but the strength was obvious — a big reason he earned the starting nod the first week of camp.

“I knew people had high expectations, but after that first play the nerves went away,” said Levis, whose completions included 12 for at least 19 yards. “I think that means I care about the team and the outcome.”

Kentucky certainly needed an encouraging debut following an offseason of staff and roster turnover. Not to mention, some fall camp controversy with last month’s arrests of six Wildcat players on burglary charges.

It wasn’t flawless as the Wildcats committed three turnovers. Those miscues ultimately didn’t matter as they regained control for good.

“Always good to get the season started with a victory,” Kentucky coach Mark Stoops said after improving to 50-50 all time. “It came with us making some mistakes which I talked all through the preseason that we would have some lows and some highs in practices and games. I thought our team responded.”

“I do know that we play a team that’s better than us, you’ve got to make them drive the field,” Bowden said. “One-play drives get the game out of hand, and we let too many big plays happen there.”

Robinson, from nearby Frankfort, delivered big in his Wildcats debut. The former AP Mr. Football caught a 62-yard pass and 15-yard TD on successive receptions, but most impressive was his second-effort spin into the end zone on the catch after getting drilled inside the 5. He was later treated for a cut on his forehead, a well-earned badge of honor for physicality.

“I know when I got hit it cut my head open,” he said. “They thought I was concussed, but I knew I was OK. They just had to check me out and close the cut.”

Levis created a social media following by eating a brown banana — peels and all— and challenged Stoops to eat one if he threw for 400 yards. The QB came close but was lifted after throwing his final TD pass, and his coach was relieved not having to pay up.

“Eat the banana? That’s why I got him out of there,” Stoops joked.

ULM: Bowden and the Warhawks must wait two more weeks for a chance to snap their drought. The Sun Belt Conference school did well in converting Johnson’s interception off a tipped pass into an early touchdown by converting two third-and-long plays. But they were otherwise overmatched and earned their points with short fields after taking over in Kentucky territory.

Kentucky: The Wildcats began as their own worst enemy with Levis’ tipped interception followed by defensive penalties and mistakes that led to ULM’s first touchdown. Those setbacks were quickly forgotten as Levis showed his big arm on deep passes to Ali and Robinson. The defense was downright nasty, holding ULM to just 17 yards rushing while recording 14 tackles for loss with six sacks. 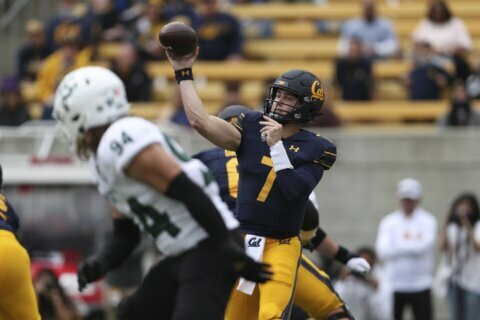 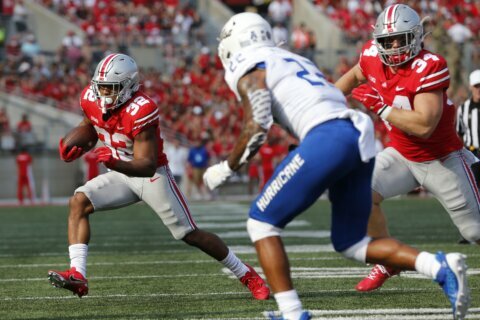