K-State a fresh start as Stanford builds off strong finish

ARLINGTON, Texas (AP) — Kansas State looks forward to the fresh start. Stanford hopes to build off the momentum of a strong finish.

“I really believe last year, I think we were just kind of turning into the team we wanted be,” 11th-year Cardinal coach David Shaw said. “We weren’t perfect yet but we were playing really hard, a lot of things were coming together. Now I’m excited about having an entire arc with this group, the full 12-game slate and see how good we can be.”

After winning the last four games in a pandemic-altered 4-2 season playing only Pac-12 opponents, Stanford gets an early start in its 2021 opener Saturday against the Wildcats inside the home stadium of the NFL’s Dallas Cowboys.

Longtime K-State quarterback Skylar Thompson was done after a shoulder injury the third game of a 4-6 season. The Wildcats started 4-0 in Big 12 play before losing their last five games, including 45-0 to Iowa State and 69-31 to Texas in the finale.

The last time the Wildcats had a longer season-ending skid came in 1989 when they dropped the final seven games to finish 1-10 in coach Bill Snyder’s debut. They were 0-21-1 the previous two seasons.

Thompson is back for his sixth year in the program, with the extra year of eligibility granted to players amid the pandemic. He is set to make his 31st career start, one short of matching the program record for quarterbacks.

“It’s been a long time coming,” Thompson said. “I’m just eager to go out and go play and be out there with my teammates, and be in the fire again.”

With Davis Mills now in the NFL, Stanford will rotate quarterbacks as Shaw works to settle on a regular. Both senior Jack West and 6-foot-6 sophomore Tanner McKee will get snaps under center in the opener. West has played in five career games, McKee one.

“I won’t talk about how they’ll rotate but they will rotate,” Shaw said. “Both guys will play in this first game and we’ll see how it goes from there.”

Deuce Vaughn was Kansas State’s top rusher and receiver as a freshman last season. He was one of only three players nationally to have at least 600 yards rushing and 400 yards receiving. Austin Jones ran for 550 yards as a sophomore for Stanford last year and led the Pac-12 with nine rushing TDs. His 21 catches were the second-most for the Cardinal.

Stanford practiced early to prepare for the 11 a.m. Central time kickoff — hitting the field at 9 a.m. Tuesday to get ready for the morning start.

“As far as the 9 o’clock kickoff time for our bodies, still not a fan of it, still think it’s ridiculous,” Shaw said.

The Cardinal is the only Power Five team opening this season with three consecutive games away from home, and that is after playing its final four games last season on the road. Stanford still has games at USC and Vanderbilt before its home opener Sept. 25 against UCLA.

Stanford planned to get an in-person look Friday at the 80,000-seat NFL stadium, which has a 60-yard long video board hanging directly over the field.

“We’re not completely doing the whole ‘Hoosiers’ thing, but I want the guys to see the stadium,” Shaw said, referencing the beloved basketball movie featuring hoopsters from tiny Hickory, Indiana. “It’s a sight to behold.”

Stanford has a handful of players who dealt with injuries last season back in the mix providing the Cardinal with much better depth in 2021. That includes the offensive line, to which Shaw said, “we look like a Stanford offensive line when we walk out there.” … The game is one of only four neutral site matchups featuring two Power Five teams during the opening weekend. …Stanford is scheduled to play 12 Power Five programs in 2021, becoming the first program since USC in 2011 to play only P5 schools. 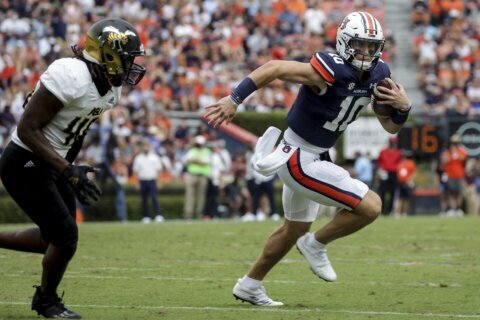 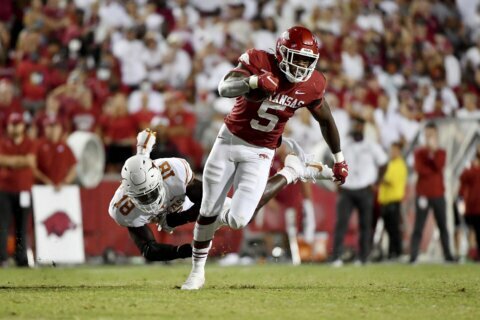 No. 20 Arkansas looks to build on Texas win vs. Ga. Southern 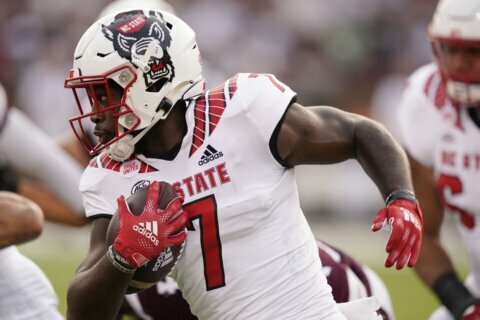