With Kiffin back home, Ole Miss romps past Louisville 43-24

ATLANTA (AP) — From more than 300 miles away, Lane Kiffin liked what he saw.

Matt Corral threw for 381 yards and accounted for two touchdowns, Snoop Conner ran for a pair of scores and Mississippi romped to a 43-24 victory over Louisville on Monday night even without its head coach.

Despite being fully vaccinated along with everyone in his program, Kiffin tested positive for COVID-19 and was not be able to accompany the team to its season-opening game at Mercedes-Benz Stadium in Atlanta.

Ole Miss did just fine with its quarantined coach watching from Oxford, piling up 569 total yards.

“If they’re going to play like that without me, I’ll just stay here,” Kiffin quipped on a post-game Zoom call from campus. “I’m already here. I don’t have to travel back. I’m already watching (next opponent) Austin Peay film right now.”

Kiffin said he plans to be back on the sideline for Saturday’s game, though he still sounded a bit under the weather.

“It really is amazing what energy does,” he said. “I completely forgot about it when the ball kicked off. I forgot I was sick. But I’m feeling better.”

Corral completed 22 of 32 passes, including a 6-yard touchdown to Dontario Drummond. The Ole Miss quarterback also ran 6 yards for a score, while Drummond finished with 177 yards on nine receptions.

Conner had TD runs of 1 and 11 yards, barreling right over a Louisville defender on the second score. Jerrion Ealy also powered over from the 1 and Caden Costa kicked three field goals.

“Every time we get the ball,” Corral said, “our goal is to score.”

Kiffin didn’t appoint an acting head coach, saying everyone on his staff would play their usual roles in his absence. But much of the attention was on offensive coordinator Jeff Lebby, who calls plays for a group that averaged nearly 40 points a game in Kiffin’s first season.

The Southeastern Conference school showed no signs of letting off the gas in 2021. Ole Miss led 26-0 at halftime before a sparse crowd announced at 30,709; the upper deck in the 71,000-seat stadium wasn’t even used.

But the biggest improvement came on the defensive side, where Ole Miss broke out a new scheme mainly using three down linemen, two linebackers and a bunch of defensive backs.

While Louisville quarterback Malik Cunningham ran for two TDs and passed for another, all of his production came in the second half with the outcome no longer in doubt.

Cunningham was held 17 yards passing in the first half to cap a brutal opening weekend for the Atlantic Coast Conference.

Louisville coach Scott Satterfield conceded that his team was caught off guard by the changes in Ole Miss’ defensive scheme.

“Sometimes when you’re playing a first opponent, you don’t know exactly the things they’re going to be doing defensively,” he said. “We never got into a rhythm in the first half.”

The ACC went 0-4 in non-conference games against Power Five opponents, including Miami’s 44-13 loss to top-ranked Alabama in the first Chick-fil-A Kickoff Game of the holiday weekend on Saturday.

In addition, No. 10 North Carolina was upset in a conference game by unranked Virginia Tech, while Georgia Tech and Duke suffered embarrassing losses to Northern Illinois and Charlotte, respectively.

Showing some lack of discipline without its head coach, Ole Miss was warned and then given a 5-yard penalty for sideline interference when players kept running on the field after big plays.

Of course, Kiffin’s team had plenty to celebrate.

Even with their coach more than 300 miles away.

“It was unusual not being there,” Kiffin said. “I’m proud of the way the coaches and the players handled a curve ball like that.”

Louisville: After plodding to a 12-12 record in Satterfield’s first two seasons, the Cardinals gave little indication that major improvement is coming. The offense managed just 107 yards in the first half and the defense rarely slowed Ole Miss.

Ole Miss: After giving up an average of 38.3 points per game in 2020, Ole Miss forced a pair of turnovers and held an opponent scoreless in the opening half for the first time since 2016. “We completely changed schemes from what we did a year ago,” Kiffin said. “The players bought in and it paid off. We limited their explosive plays. You saw a lot of guys running downhill hitting people.”

Four players — two from each team — were ejected from the game in the first half for targeting.

Peterson was called for a helmet-to-helmet hit while blocking on a kickoff return.

Ole Miss: Faces FCS school Austin Peay in Oxford on Saturday. Kiffin said he expects to be cleared either Friday or the day of the game to be on the sideline. 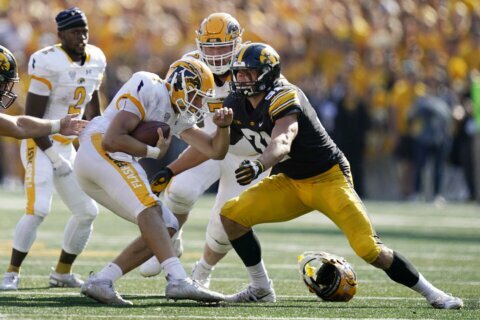