The first week of college football is in the books and, surprisingly enough, no players were injured while lining their…
Listen now to WTOP News WTOP.com | Alexa | Google Home | WTOP App | 103.5 FM

The first week of college football is in the books and, surprisingly enough, no players were injured while lining their pockets with endorsement money.

The end of college football as we know it didn’t come either, confounding the ominous warnings repeated so often for so long by so many in positions of power in the sport.

Actually, the biggest takeaway of this nascent season might be this: Despite the fact that some players are getting paid for the first time, college football so far looks a lot like college football has looked for a long time now.

Well, not exactly the same. There was Alabama coach Nick Saban, after all, wearing a leather helmet after his team opener and looking like he wanted to get three yards in a cloud of dust.

Saban can afford the look. He just signed a contract extension that will raise his salary to more than $11 million a year by the time it ends eight years from now.

His new quarterback might be shopping for some new accessories, too. Bryce Young made a spectacular debut as the latest quarterback sensation for the Crimson Tide, throwing for 344 yards and four touchdowns in his national coming-out party.

The best part? Young got paid to do it, as part of a series of deals that Saban earlier estimated could end up netting him a million dollars before he ever threw a pass.

That kind of money could conceivably cause problems on teams where second-string tackles and punters aren’t making a dime. There are inequities and issues with how money is made and doled out, and it remains to be seen how the system eventually settles out.

But there’s no reason the star quarterback on a team that generates hundreds of millions a year shouldn’t get some of the action himself. No reason why other players shouldn’t get more than just room and board and pizza money when assistant coaches are making $2 million a year and athletic directors are bringing in the same.

Young’s performance in his first college game will probably get him even more in his NIL deals, as well it should. His coach gets paid — and paid incredibly well — to win games, and the players who actually win those games deserve their share.

Otherwise, though, it was pretty much business as usual in a sport that now is about as big a business as it can be.

Ohio State had a new quarterback with new deals of his own as the Buckeyes, reloading much like Alabama, beat Minnesota in a prime-time opener that Fox said drew 6.3 million households and was its highest-rated opening week game ever.

And Notre Dame and Florida State capped things off with an overtime thriller and the best comeback story of the year in Seminoles quarterback McKenzie Milton, who sparked his team late after being told by so many that he would never play again because of a bad leg injury.

All this in a sport that was supposed to be ruined by players getting paid. No one would watch anymore, college football officials proclaimed, because the games would no longer be contested by amateurs.

Turns out that not only do fans still want to watch but they want to be involved in more ways than before. That includes betting on college games, which in the threat rating raised by those running college football in recent years came in a close No. 2 to athletes being paid.

With sports betting expanding across the country, there could potentially be record handles set every week as the point spread evens out the action and fans back their favorite teams not just to win but to cover.

That made a lot of Alabama fans even happier in the 44-13 romp over No. 14 Miami, which came into the game as a 19.5-point dog. Three out of every four bettors at Caesars Sportsbook laid the points on the Crimson Tide and were rewarded for their efforts with some nice payouts.

There’s a lot left to shake out before we find out where college football will eventually settle. With big defections in the Big 12, more consolidation in the power conferences and the acknowledgement by the NCAA that it is not really in control of big-time football anymore, there surely will be even more changes in how the games play out.

There’s too much fan engagement and way too many TV dollars to think otherwise. 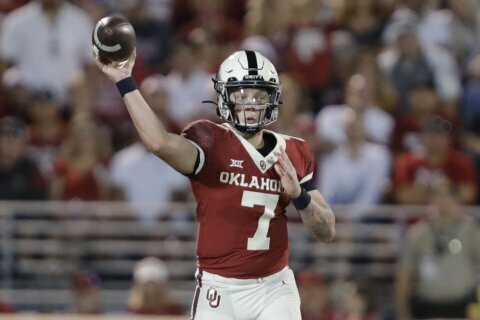 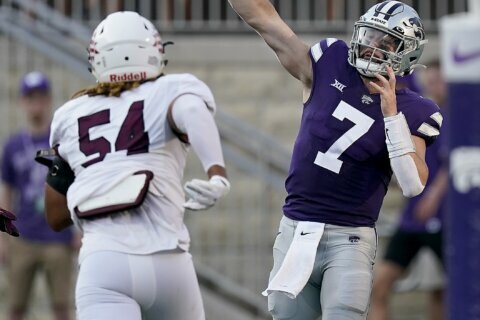 K-State QB Thompson unlikely to play vs No. 6 Oklahoma 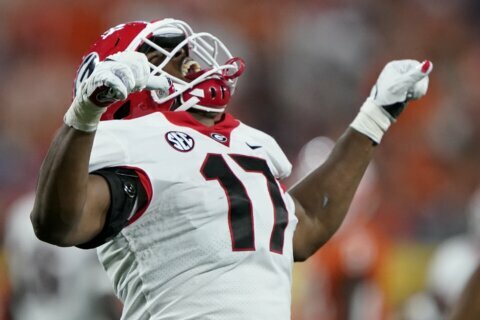