—Eric Barriere, Eastern Washington, set a FCS record for passing yards in a half with 487, finishing with 542 yards overall and six TDs in a 62-56 win over Western Illinois.

—Jaylen Warren, Oklahoma State, rushed for 218 yards and two TDs to help the Cowboys escape with a 21-20 victory over Boise State.

—Sam Howell, North Carolina, threw five TD passes and ran for a career-best 112 yards as the No. 21 Tar Heels took over after halftime to beat Virginia 59-39.

—Wiley Hartley, Campbell, threw six touchdown passes and the Camels forced a program-record 10 turnovers in a 72-0 rout over Presbyterian.

—Malik Willis, Liberty, threw for four TDs and ran for two more in a 45-17 win over Old Dominion.

—Cole Kelley, Southeastern Louisiana, threw for 444 yards and four TDs in a 56-10 win over Central Connecticut.

—KJ Jefferson, Arkansas, threw for a career-high 366 yards and tied a career high with three TDs to lead the No. 20 Razorbacks to a 45-10 win over Georgia Southern.

—Dylan Morris, Washington, passed for 367 yards and three TDs, and the Huskies rebounded from two disappointing losses with a 52-3 win over Arkansas State.

—Aaron Shampklin, Harvard, ran for 183 yards and two TDs in a 44-9 win over Georgetown.

—Payton Thorne, Michigan State, passed for 261 yards and four TDs as the Spartans extended their unbeaten start by topping No. 24 Miami 38-17.

—DJ Irons, Akron, threw three TD passes and ran for another score in a 35-14 victory over Bryant.

—Trey Potts, Minnesota, ran for 121 yards and three TDs, and the Gophers won their 21st straight nonconference game by beating the Buffaloes 30-0.

The defending national champion Crimson Tide stopped a 2-point conversion with 3:10 left and extended its winning streak to 17, making it 32 in a row against teams from the SEC’s Eastern Division.

The Gators have dropped eight straight in the series and fell to 0-5 against No. 1-ranked teams at Florida Field.

This one was closer than oddsmakers and just about everyone else expected, with 14 1/2-point underdog Florida having a chance to tie the game in the closing minutes despite playing without dynamic backup quarterback Anthony Richardson.

Jaquan Brisker skipped across a field littered with white pom poms and toward a row of Penn State students painted white from head to toe.

The Nittany Lions’ star safety had a big smile on his face, and it didn’t fade one bit even as he tripped over a photographer while celebrating a dramatic win on a raucous night in Happy Valley.

Brisker broke up a desperation pass toward the end zone by Auburn’s Bo Nix as time expired and No. 10 Penn State held on to beat No. 22 Auburn 28-20.

Sean Clifford completed 28 of 32 passes for 280 yards and two touchdowns as Penn State welcomed back its white out crowd to Beaver Stadium for a rare visit from a Southeastern Conference teams.

9_Years since Rutgers started 3-0 before this season.

13_Years since Oregon State’s last shutout before a 42-0 win over FCS opponent Idaho.

Oklahoma and Nebraska played as if they were trying to uphold the history of the rivalry.

Spencer Rattler passed for a touchdown and ran for another, and No. 3 Oklahoma held on to beat Nebraska 23-16.

Celebrating the 50-year anniversary of the “Game of the Century” — No. 1 Nebraska’s 35-31 win over No. 2 Oklahoma in 1971 — the teams rewarded their nostalgic fans with a competitive contest. The programs had a fierce, yet respectful rivalry in the Big Eight and Big 12, with Nebraska winning five national titles and Oklahoma claiming four between 1970 and 2000.

It was their first meeting since 2010 — right before Nebraska left the Big 12 for the Big Ten — and much closer than expected. 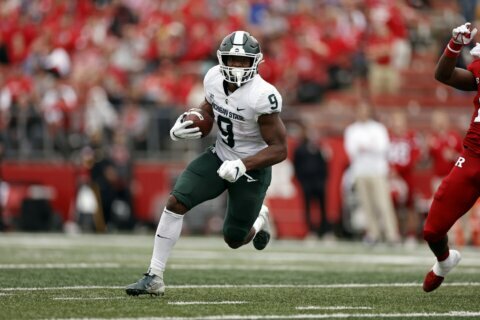