Clemson and Ohio State slipped to the back of the top 10 in The Associated Press college football poll on…
Listen now to WTOP News WTOP.com | Alexa | Google Home | WTOP App | 103.5 FM

Clemson and Ohio State slipped to the back of the top 10 in The Associated Press college football poll on Sunday and Penn State jumped four spots to No. 6 after another weekend in which lots of ranked teams had issues.

The defending national champion Crimson Tide remained an overwhelming No. 1 after holding on to beat Florida 31-29, Alabama’s closest margin of victory during its current 17-game winning streak. The Tide received 59 of 62 first-place votes.

No. 2 Georgia, which had no problem with South Carolina, received the other three first-place votes in the AP Top 25, which is presented by Regions Bank.

No. 3 Oregon moved up a spot and No. 4 Oklahoma slipped one after a close victory over Nebraska.

Iowa was No. 5 for a second straight week and Penn State has its best ranking since the Nittany Lions were fifth on Nov. 3, 2019. Penn State beat Auburn on Saturday night to give it two victories against ranked teams, along with Wisconsin.

No. 9 Clemson and No. 10 Ohio State both won Saturday, but neither looked typically dominant. The Tigers managed only 14 points against Georgia Tech and the Buckeyes struggled defensively before pulling away late against winless Tulsa.

Clemson was last ranked this low early in 2015, when the Tigers started the season in the low teens but ended up playing for the national championship.

For Ohio State, 11th has been its lowest rankings since the 2014 season, when a Week 2 loss to Virginia Tech sent the Buckeyes tumbling as far as No. 23. They never lost again that season and won the national title.

Six ranked teams lost Saturday, though none in the top 10, raising to 19 the total number of ranked teams to lose through the first three weeks of the season.

That’s the most through three weeks of a season in the history of the poll, according to ESPN’s stats and info.

The number is padded by 10 ranked teams losing to ranked teams. Also, only one top-10 team has lost to an unranked team: North Carolina was preseason No. 10 when it opened with a loss to Virginia Tech.

It’s been a volatile first few weeks of the 2021 season, though not quite as crazy and unpredictable as it might look at first glance.

A total of 35 teams have been ranked through three regular-season polls.

— No. 22 Fresno State won maybe the weekend’s most thrilling game, upsetting UCLA with two late scoring drives led by quarterback Jake Haener. The Bulldogs are ranked for the first time since the final AP Top 25 of 2018.

No. 24 UCLA dropped 11 spots after its first loss of the season.

— Virginia Tech slipped out after losing at West Virginia.

— Arizona State is out for the first time this season after losing to BYU. The Cougars moved up eight spots to No. 15 after a second straight victory against a ranked Pac-12 team.

— Miami is out for the first time this season after falling to 1-2.

No. 12 Notre Dame vs. No. 18 Wisconsin at Soldier Field in Chicago. Toughest test yet for an Irish team that is unbeaten but far from perfect. 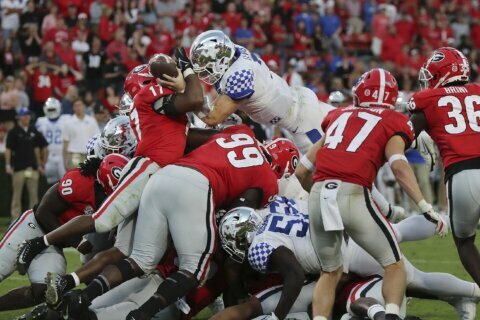 No. 1 Georgia looks to continue trend in ‘Cocktail Party’ 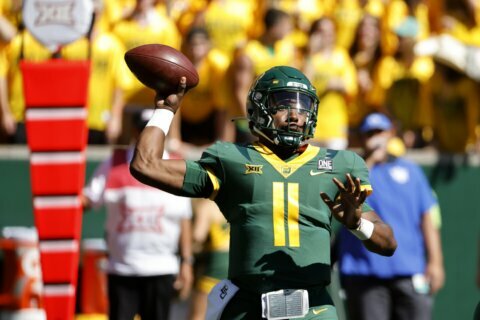 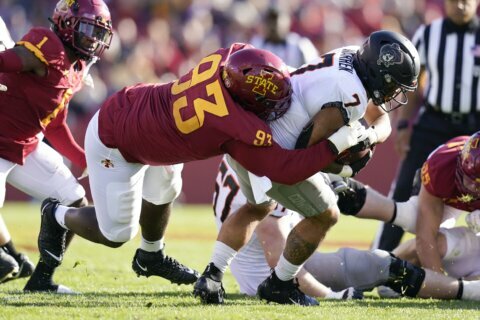 No. 15 Oklahoma State looks to bounce back from first loss