Cochran, Alabama’s former strength and conditioning coach, was hired by Smart to the on-field position before the 2020 season. Though Cochran was named the Bulldogs’ special teams coordinator, Smart said after Saturday’s scrimmage other assistants, including tight ends coach Todd Hartley, always contributed.

“It is really a total team effort,” Smart said. “It always is. It was last year.”

Georgia announced last week Cochran “is currently dealing with health issues and is taking time to prioritize his mental health and well-being.”

Muschamp, who joined Georgia’s staff as a defensive analyst, has moved on field to help fill the void left by Cochran’s absence. Smart said Muschamp played a lead role on special teams as South Carolina’s coach and “brings a lot of energy to the meetings.”

“The players respect him and the job he’s done, and so far I’ve been really excited,” Smart said, adding Muschamp has “almost reinvigorated” the meeting room “because there’s a new voice.”

Smart described the team’s support for Cochran as “critical.”

“I think that we all deal with issues and problems within our own households and our own families,” Smart said. “Those are personal things. We are a family here, and our players have really embraced that.”

Smart said wide receiver Arik Gilbert, the transfer from Louisiana State, was “dealing with some personal issues” and away from the team. Smart said he hopes to have Gilbert back soon. 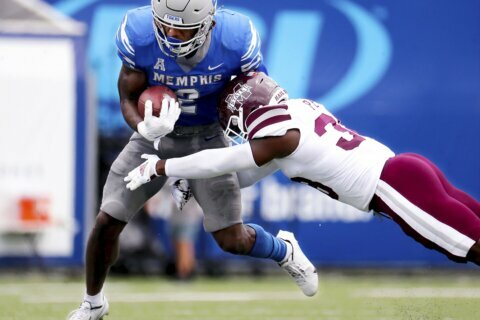