Big 12 teams face forfeits if virus keeps them from playing

IRVING, Texas (AP) — Big 12 teams unable to play a game this fall because of COVID-19, or any other reasons, will have to forfeit and be given a loss in the conference standings.

The Big 12 released its game threshold policy Tuesday. A no contest would be declared only if both teams are unable to compete, and there are no plans to make up any games not played as scheduled.

Roster thresholds that were in effect for the Big 12 last season are no longer in play. Teams without at least 53 available players, and a minimum number at certain positions, could get a no contest declared last year if unable to play and unable to reschedule the game.

The Big 12 said a forfeit can happen at any point before a completed contest, and when possible would occur prior to the visiting team traveled to the game site.

Both teams would be deemed to have played the game for the purposes of conference standings only, with the team not forfeiting being credited with a win.

Pac-12 officials said last week that its teams that cannot play because of COVID-19 issues will likely be forced to forfeit games, with the conference reinstituting its forfeiture policy after it modified its rules last season because of the pandemic. SEC Commissioner Greg Sankey has been clear that forfeits — not postponements, like last year — were on the table in his league.

The Big 12 last season got 43 of its 45 scheduled conference games played. 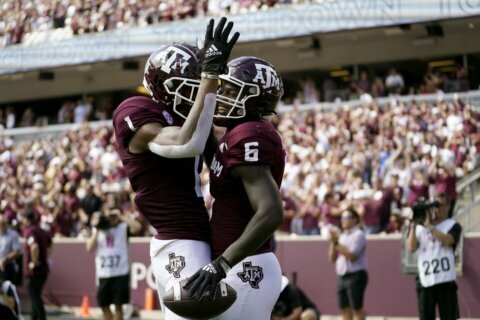