The board of regents for the University of Texas voted unanimously Friday to accept an invitation for the Longhorns to join the Southeastern Conference.
Listen now to WTOP News WTOP.com | Alexa | Google Home | WTOP App | 103.5 FM

Oklahoma and Texas accepted invitations to join the Southeastern Conference in July 2025 on Friday, worried that their storied athletic programs were in danger of losing ground if they stayed in the Big 12.

A whirlwind week of official moves —- after who knows exactly how long the schools worked behind the scenes —- came to a conclusion when regents at both Texas and Oklahoma unanimously jumped at the chance to join the SEC.

“After thorough consideration and study it became obvious that standing pat would be falling behind,” Oklahoma athletic director Joe Castiglione said.

The SEC, already the strongest football conference in the country, welcomed its newest members, who arrive with 10 national championships between them as determined by The Associated Press.

“The SEC has already established itself as the premier conference in collegiate athletics, and the addition of these two tradition-rich programs will make for an even more competitive league in all sports,” Alabama athletic director Greg Byrne said in a statement.

New broke of discussions between Texas and Oklahoma and the SEC last week. The schools and conference remained silent on the matter until this week.

On Monday, Texas and Oklahoma informed the Big 12 they would not be extending a media rights agreement with the conference after it expires in 2025.

On Tuesday, the schools applied for SEC membership.

On Thursday, the SEC presidents voted to extend invitations, and Friday it was a done deal.

For now, the arrival of the Longhorns and Sooners in the SEC is four years out. Texas and Oklahoma are bound to the Big 12 and its other eight members by a grant of media rights that runs through the 2024-25 school year, concurrent with the conference’s television contracts.

“I want to just reiterate that we will be in the Big 12 for the foreseeable future,” Texas athletic director Chris Del Conte told his board.

The future of the Big 12 without its two strongest programs, in football and many other sports, is unknown. Earlier this week, Commissioner Bob Bowlsby said “like many others, we will use the next four years to fully assess what the landscape will look like in 2025 and beyond.”

“The remaining eight institutions will work together in a collaborative manner to thoughtfully and strategically position the Big 12 Conference for continued success, both athletically and academically, long into the future,” he said.

None of that is likely to stop Texas and Oklahoma from trying to leave earlier than 2025 despite facing tens of millions of dollars in buyouts and potential legal headaches.

After all, a windfall awaits in their new conference.

Even before adding Texas and Oklahoma, the SEC was projected to distribute $67 million to each of its current 14 members starting in 2024 when a new deal with ESPN kicks in.

Del Conte and UT President Jay Hartzell met by teleconference with the board, which quickly signed off.

“Collegiate athletics is changing rapidly, whether any of us wants it to or not,” Hartzell said.

“We recognize that we must be willing to make changes with our eyes on the future. In a world of uncertainty and change, it is incumbent upon on us as leaders to protect and enhance our athletic program and university,” Hartzell said.

The last time the Big 12 was reconfigured by conference realignment, Texas and Oklahoma stayed put but Nebraska, Texas A&M, Colorado and Missouri moved and TCU and West Virginia were added in the early 2010s.

With Texas and Oklahoma driving the value, the Big 12 landed television contracts with ESPN and Fox worth billions and settled in as a Power Five conference.

“What has changed between 2012 and today?” Harroz said. “The answer is everything.”

Harroz said it became apparent the Big 12 would be “last in line” for television networks among the power conferences when it came to landing a new TV deal. That would mean, among other issues, more less-than-desirable 11 a.m. kickoffs for many games for the Sooners.

That issue has become a major one for Oklahoma in recent years, especially after its home game with Nebraska this season – designed by Castiglione as a celebration of the 50th anniversary of the so-called “Game of the Century” in 1971 between the Huskers and Sooners – was designated for an 11 a.m. Central time local kickoff by Fox Sports. Castiglione saie he was “bitterly disappointed.”

“Being last in line has consequences,” Harroz said. “You’ve heard conversation from (Castiglione) talking about not enjoying 11 a.m. kickoffs. Our fans talk about that. It also matters to student-athletes. When those who go before you, in terms of negotiations for 2025 and beyond, if those premiere slots are already taken up, it impacts things in a material way. It translates into disadvantages in recruiting the top talent, disadvantages for our student-athletes and a detriment to the fan experience.”

Harroz and Castiglione both praised their counterparts in the Big 12, particularly those from Oklahoma State, whose new president, Kayse Shrum, has been particularly critical of Oklahoma during the past week.

Harroz said the Sooners would like for their Bedlam rivalry with the Cowboys and Cowgirls to continue.

“Even with this change, we want to play Oklahoma State in every sport in every year,” he said.

Earlier, Hartzell thanked Texas A&M for voting the Longhorns into the SEC and looked forward to renewing Texas’ rivalry with the Aggies and former Southwest Conference-mate Arkansas.

“A lot of work has gone into this,” Texas board chairman Kevin Eltife said, “and there’s no doubt in my mind it’s definitely the right thing for the future of athletics at our flagship.” 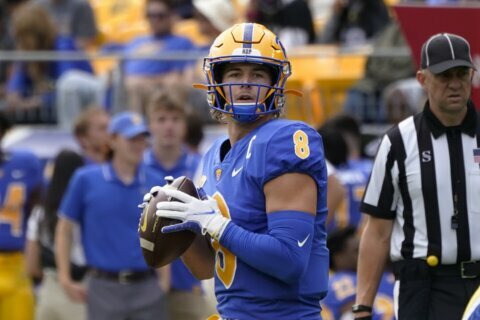