The Atlantic Coast Conference's top offenses should be right back in the flow next season. There will just be some new faces at North Carolina and Clemson that will be piling up the yards.
Listen now to WTOP News WTOP.com | Alexa | Google Home | WTOP App | 103.5 FM

The Atlantic Coast Conference’s top offenses should be right back in the flow next season. There will just be some new faces at North Carolina and Clemson that will be piling up the yards.

The Tar Heels, who led the ACC with more than 537 yards a game, still have perhaps the league’s best quarterback heading into the fall in junior Sam Howell.

But North Carolina won’t have its 1,000-yard backfield in Javonte Williams and Michael Carter, who combined to 33 touchdowns last fall.

Howell’s prime targets from a season are are also off to the NFL in receivers Dyami Brown and Dazz Newsome, who combined for 109 catches, 1,783 yards, and 14 touchdowns a year ago.

Howell, the talented passer who is projected a top NFL draft choice in 2022, will spend the next few months getting the next wave of offensive talent ready to build on. Ty Chandler, a Tennessee transfer, arrives to help the backfield while Dyami Brown’s brother, Khafre Brown, was third with 337 yards in receptions returns.

“So its gives me an opportunity to kind of watch every single position and then after every play, kind of talk to guys if they’re doing stuff wrong,” Howell said.

Etienne, the ACC player of the year in 2018 and 2019, leaves as the league’s all-time rusher, surpassing the mark of North Carolina State’s Ted Brown set in the 1970s.

The Tigers appear set at quarterback as sophomore D.J. Uiagalelei takes over behind center for Lawrence. Uiagalelei was one of the country’s top high school passers and showed that last season when Lawrence was sidelined for two games due to COVID-19.

He rallied the Tigers from 18 points down to defeat Boston College on Oct. 31, then threw for 439 yards against Notre Dame in a 47-40 OT loss a week later.

Clemson’s backfield is far less settled. Lyn-J Dixon has backed up Etienne the past three years and will likely get the first crack at the spot this fall. But the Tigers also have several hungry backs looking to make a mark including five-star freshman Will Shipley.

Some other things to know about the upcoming ACC football season:

The Hurricanes showed promise under second-year coach Manny Diaz last fall and have some of their key pieces back from a team that went 8-3 a year ago.

Quarterback D’Eriq King, who threw for 2,686 yards with 23 touchdowns and five interceptions, is recovering well from a torn ACL suffered in Miami’s bowl loss to Oklahoma State.

“He is doing great like we thought he would,” Diaz said. “Everything they ask him to do in rehab, he one ups it.”

Safety Bubba Bolden, the team’s top tackler last year, turned down the NFL to come back to Miami for a another season.

Florida State coach Mike Norvell believes his team took some steps forward from their 3-6 season last year. A lot of that could be the play of UCF transfer McKenzie Milton this spring who completed 6 of 11 passes for 96 yards and a touchdown as returns from a devastating knee injury in Nov. 2018.

Norvell hasn’t said whether Milton or Jordan Travis, who started six games last year, is the frontrunner heading into the fall camp. Still, Milton’s passes were precise and he showed good mobility — all good signs for the Seminoles.

Don’t sleep on college football’s opening week when several ACC teams will have challenging tests that will impact their season.

Clemson opens against Georgia of the SEC in Charlotte, North Carolina on Saturday, Sept. 4. It’s the first time these schools have played — their campuses are less than 90 minutes apart — since 2014 in Athens, Georgia when the Bulldogs won 45-21,

Miami opens against defending national champion Alabama in Atlanta on Sept. 4. The Hurricanes and Crimson Tide last met in the 1993 Sugar Bowl for the national championship, won by Alabama 34-13.

Also, Louisville faces Ole Miss of the SEC and Florida State plays Notre Dame to start the season. The Fighting Irish who competed for the ACC crown last season, have returned to their FBS independent status.

The ACC enters 2021 with no new head coaches heading into the fall. League schools changed six head coaches combined in 2019 and 2020 and ACC administrators chose to stand pat in going forward. It’s the first time since the 2018 season league schools have kept their head coaches.

Clemson’s Dabo Swinney and Duke’s David Cutcliffe are the deans of the group, each leading their programs since 2008. Boston College’ Jeff Hafley and Florida State’s Mike Norvell are the newest, both arriving after the 2019 season.

North Carolina State’s Dave Doeren received a two-year contract extension. Mack Brown also received a new contract that will keep him with the Tar Heels through 2025. 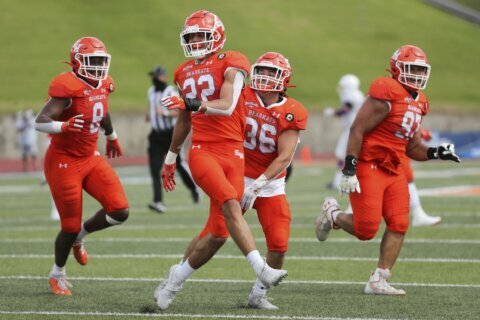