HUNTSVILLE, Texas (AP) — Isaiah Downes intercepted a fourth-down pass in the end zone with less than a minute on the clock and Sam Houston State escaped the opening round of the FCS playoffs with a 21-15 win over a rallying Monmouth on Saturday.

The fourth-ranked and No. 2-seeded Bearkats, improved to 14-0 in FCS Playoff games at Bowers Stadium. They will host the winner of the Eastern Washington at North Dakota State game.

Ramo Jefferson gained 95 yards on nine carries for Sam Houston State (7-0) with touchdown runs of 56 and 3 yards. On his second touchdown, Jefferson was hit at the line of scrimmage on third-and-goal, but he stayed upright and dragged a knot of defenders three yards across the goal line early in the third quarter.

The TD gave Sam Houston a 21-0 lead and the Bearkats seemed poised to win in a blowout.

Tony Muskett and the Monmouth offense — bottled up throughout the first half with three sacks, 10 tackles for loss and an interception — switched to a variety of screen passes to score 15 points in the fourth quarter on back-to-back drives of 90 and 86 yards.

The 10th-ranked Hawks (3-1), helped by consecutive pass interference penalties, were driving a third time and reached first-and-goal from the 9 with just over two minutes left.

Muskett’s fourth-down, all-or-nothing pass to back of the end zone was picked off by Downes and the Bearkats ran out the remaining 48 seconds.

Muskett competed 29 of 46 passes for 297 yards with a touchdown and two interceptions. Eric Schmid was 12-for-24 passing for 133 yards and a score for the Bearkats.

Monmouth rolled up 398 yards of offense to Sam Houston’s 257, but were hampered by six sacks for a loss of 32 yards. The Bearkats made 15 tackles behind the line of scrimmage for a loss of 61 yards. 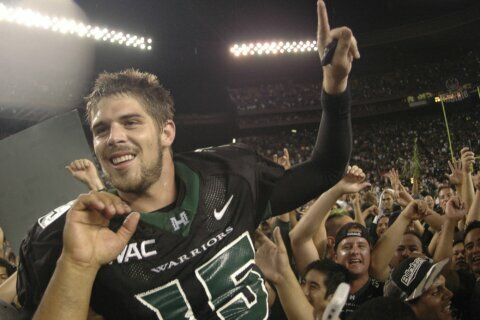