FARGO, N.D. (AP) — Hunter Luepke barreled 55 yards for a touchdown less than a minute into the game and North Dakota State never trailed in a 34-13 defeat of North Dakota on Saturday in a clash of top-four teams in the FCS.

Luepke had missed all of North Dakota State’s previous spring games with a shoulder injury, but on the fourth play from scrimmage he took a handoff from Zeb Noland, cut around the right side of the Bison line, split two defenders, fought off a would-be tackler at the 10 and, losing his balance, dove the final three yards into the end zone for a career-long run.

North Dakota State racked up 456 yards of offense, including 316 rushing, to North Dakota’s 304.

The Fighting Hawks picked off Noland late in the first quarter and scored on a long run of their own when Weah raced 74 yards for a TD, making the score 7-6 after the point-after kick was no good.

Luepke crashed across from the 8 on North Dakota State’s ensuing possession, and Christian Watson hauled in a 63-yard pass from Noland and the Bison led 21-6 at halftime

The two North Dakota schools have met 114 times — the tenth most-played rivalry in FCS football — but Saturday was their first clash as members of the MVFC. 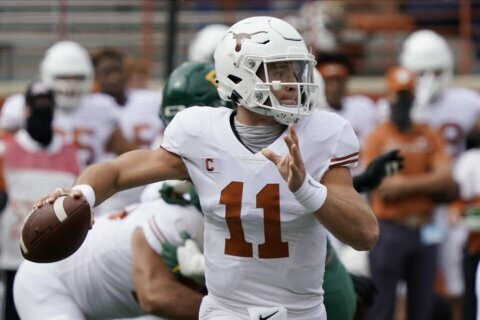