MONTGOMERY, Ala. (AP) — Ladarius Skelton passed for a touchdown and ran for another, Chase Foster scored on a 14-yard interception return and Southern held on to beat Alabama State 24-21 on Friday night in the opener for both teams in a season delayed by the coronavirus pandemic.

On a play-action pass, Skelton hit a wide-open Gregory Perkins who raced 40 more yards for a 59-yard score to make it 21-all on the second play of the fourth quarter. Alabama State then went three-and-out and Cesar Barajas made a 41-yard field goal to cap the scoring with 12:29 to play.

Ryan Nettles was 16-of-27 passing for 149 yards and two touchdowns the Hornets. He threw one interception and was sacked six times.

It was the first matchup between the teams since the Jaguars beat Alabama State 64-6 in 2016.

Foster’s pick-6 opened the scoring less than four minutes into the game and neither team led by more than seven points. A strip sack of Skelton deep in Southern territory led to a 1-yard touchdown run by Jacory Merritt that gave the Hornets their first lead at 21-14 with 15 seconds left in the third quarter. 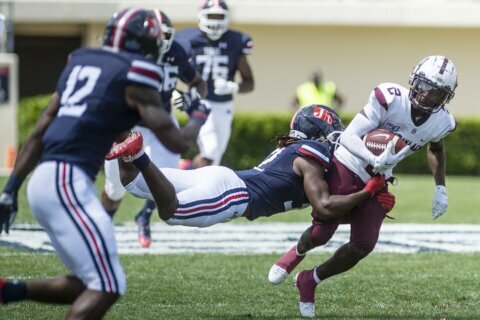